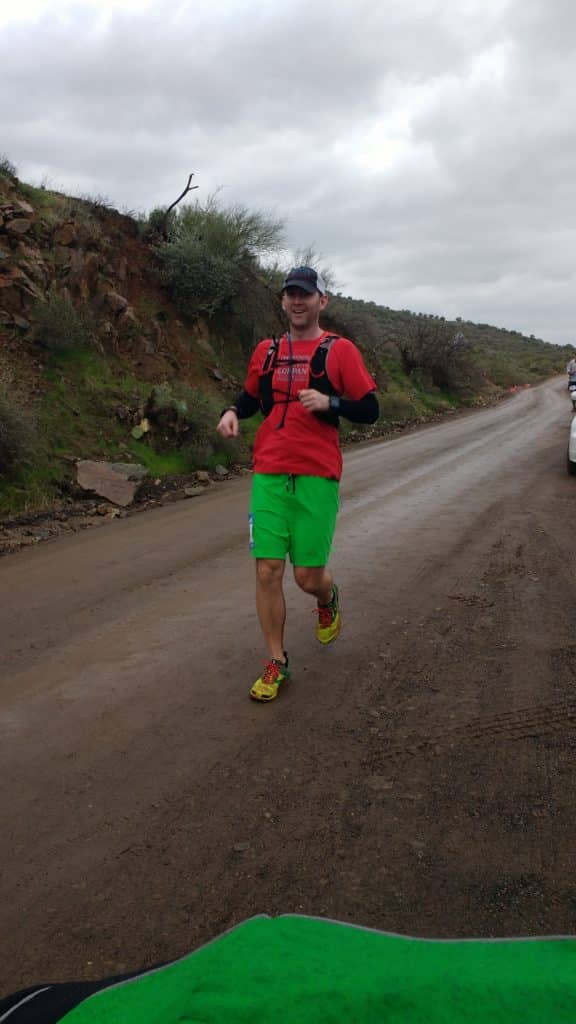 Aravaipa put on another great race. They communicated the alternate course change well in advance and managed to run everything smoothly given the weather challenges. I have been pleased with both BC100k and Javalina.

The aid stations were well stocked throughout the race and the volunteers were super helpful.

The crew was solid! It was great seeing Matt, Julie, Paavo, Daisy and Josh at various points on the course.

I know it was the alternate course (so this wouldn’t happen with the normal course), but I didn’t love the out and back on single track. It makes for a lot of getting off the trail, stopping, restarting, etc.

It was tough to get in a rhythm with the snaking nature of a lot of the course. There were very few parts, partially due to the mud, that allowed for smooth comfortable running.

I fell for the first time in a race! Not cool. What not to do – don’t be worried about how you’re going to pass someone on single track and then eat it 🙂

This race takes you to the middle of nowhere desert which can lead one to wonder, “who actually lives out here”.

I was pleased that I was able to stay positive throughout the race. My energy was fairly low much earlier in the race than I expected, but I was able to maintain a similar level of hurt for a long period of time and just get through it.

Given the rain and muddy trails, I was worried my feet would get torn up during the race. Using my drop bags, I was able to change my socks multiple times as well as my shoes to avoid any blisters.

Be prepared for anything with this race. Make sure you have gear for both hot and cold temperatures. Running in the desert without cover is always an adventure, so do yourself a favor and bring whatever you can to make things easier on yourself.

Don’t get too worked up about things you can’t control. The weather and the course change were not exactly optimal, but it’s helpful to just be able to roll with it without stressing too much.

Don’t be in a hurry. I tucked into a group on one of the technical sections on the way out, and I think it saved me from myself. I was worried about going out too fast given the steady downhill on the front half, and this helped save my legs for the way back.

It was cloudy and foggy for much of the race, but there were a few times when everything cleared up. Given the rain this winter, there was a lot of green with pretty views.

There wasn’t much elevation change, so from that perspective the course wasn’t too tough. As previously mentioned, it wasn’t very easy to get into a groove and just bang out the miles.

I was very pleased with how well the race was run. It can’t be easy making the call to completely change the course and everything else with it. I was impressed with how Aravaipa communicated all of the changes and made everything happen.

I’m not exactly a front runner, so it’s hard for me to say. There were some solid times, particularly given the conditions, so it was a decently strong field. People wanted their WS100 golden tickets!

This is typically a point to point course, so you have to decide if you want a hotel near the start or finish. In this case it ended up being an out and back from the original start, so the idea of having our hotel near the original finish went out the window. In general, the race isn’t too far outside of Phoenix, so all in all it was pretty straightforward.

The aid stations were well stocked. I’m wheat intolerant, and upon mentioning that they quickly offered to make me quesadillas with corn tortillas instead. They were roughly 5-7 miles apart, and the volunteers were great.

I know of a number of people that dropped due to the cold. I was super happy that I decided to bring multiple pairs of gloves, hats and arm sleeves. This saved me since I don’t own a wet weather running jacket.

There were a handful of aid stations that allowed for crew. This isn’t a course that brings out the spectators throughout though.

I got a buckle for the 100k finish as well as a drinking glass. The top finishers got their WS100 golden tickets.

This is a 5 out of 5 if for no other reason than the race directors. I have to believe there would have been smoother running and pretty views if it hadn’t been pouring the whole time.