In this race report, co-founder Julie Urbanski breaks down her experience of the Columbus Marathon. Read on for her tips on pacing – and how to shave 5 minutes from your time!

3 Bests – what aspects of the Columbus Marathon did you like the most?

Not so much – what aspects of the Columbus Marathon didn’t do it for you?

Weird factor – what’s the weirdest thing about the Columbus Marathon?

The spectator signs were especially fun given the election year, my favorites being, “If Trump can run, so can you!” and “Run like (picture of Trump’s face) is trying to grab your (picture of a cat’s face)”

Highlights of your race – what did you do well and enjoy about your race in particular?

The start was one of the more memorable ones. The lines for a porta potty were incredibly long and even after standing in line for 30 minutes, there were still about 10 people in front of me 5 minutes before the race. 2 minutes before the race it was finally my turn to get out those last minute pre-race poops, and as I’m hurrying to poop and wipe, the AC/DC song “Thunderstruck” is blaring outside, literally pulsing “THUNDER” through the porta potty. It certainly sped things up for me and 45 seconds before the start, I finally got in the start corral. I think that’s the closest I’ve ever cut it.

Other highlights – having Matt and Paavo out on the course. Thinking of them at the start, I choked up and almost cried, and after seeing them at mile 13, I almost cried again. It meant something completely different and special to be running my first post-baby marathon. I loved that I didn’t have any pressure for a time, and was just out there to enjoy the miles, the atmosphere, the beautiful weather, and my wonderful cheer team. 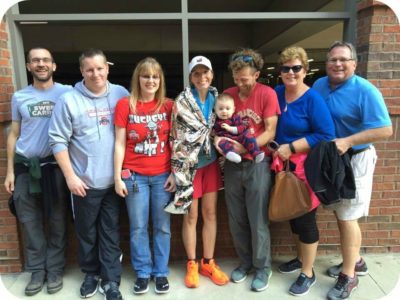 Start out conservative. It’s a flat, fast course, and with half marathoners in the mix to push the pace, it’s easy to go to fast at the start. This always seems to be a lesson, but it’s so easy to ignore this advice.

Get better at my nutrition. I ate a Gu every 5 miles and was sipping water about every mile, and every 2-3 miles I either sipped Gatorade or just swished it in my mouth and spit it out. I started the race a little dehydrated and by mile 18 or so, I was thirsty and drinking a good amount of water and Gatorade. This came back to haunt me by mile 23 and the combo of Gu, water and Gatorade was not good, so I gagged and nearly threw up the rest of the race. Not fun. Next time I need to start more hydrated and have a better nutrition routine that doesn’t overload my system, but that keeps me hydrated and energized. With the heat, it also made it hard to dial in the right combo.

Most important course specific knowledge to know about the Columbus Marathon?

Run the tangents! I didn’t get close to corners, trying to avoid the crowds on each turn, and ended up running and extra half mile! That’s at least 4-5 minutes extra! Holy crap!

Nope. Just flat and fast, which makes it tough to hold back early.

Organized and well run for sure, but they needed way more porta potties both outside the start and inside.

Logistics – Does it require a special handshake, registration a year in advance, hotels all booked? Give us the low down on the nuts and bolts of making the Columbus Marathon happen.

The half marathon sold out but not the full, but I’d register by late August to make sure you get a spot. Hotels got booked fast near the start and there was nothing left near the start that was remotely affordable or nice, so we stayed about 20 minutes from the start. We pre-booked our parking for $12 total and parked two blocks from the start and it was the best, no-hassle parking decision we’ve ever made for a race.

How were the Columbus Marathon aid stations?

Seemed like they were every mile, with water and Gatorade and Clif shots at miles 8 and 17.

Typically cool at the start, warming up, with clear skies and a touch of cool fall air. Pretty much my favorite conditions.

If just on foot, spectators can see runners at the start or first go to mile 2, then 7, then 13. If in a car, spectators can hit a couple more spots like miles 17 and 22 (ish). So yes, pretty friendly.

4.5 out of 5. If going for a BQ, this one’s a great option; the only complaint I have is the need for more bathrooms.

Prepping for a race? Check out our coach-approved checklist!

1 thought on “Columbus Marathon – Julie U”