Typical summer training for cross country is an increasing amount of easy runs to simply build a running “base” in preparation for focused training when school restarts. This assumes that middle and high school student athletes will have a break after track season or perhaps they did not participate in track running. In either case, they are in need of building a base of running for the longer distances of cross country. In some cases, they may not have run since the end of the prior season in the fall. The year 2020 is more unique in that track season was terminated and even the best conditioned runners are likely to have not trained since March.

Traditionally cross country runners are told to use the summer to run easy so that they enter their school’s program ready for serious training. I believe that a better plan is to mix in some quality workouts that change throughout the summer. This will prepare the athletes better for the early season competitions as well as provide some variety in their workouts and break the monotony of those hot summer runs. My plan starts at the two extremes and later mixes in other workouts.

This philosophy is not the best for advanced runners who are accustomed to training year round. I have seen a few who benefit from considering the summer as any other training cycle where they mix in a few road races to stay sharp with a break before their school training season starts. The plan is broken up into four phases which can be up to a month long depending on the when you start and when the school season begins.

Phase One – Easy Miles and Strides

This is a period for building an aerobic base and preparing the runner’s bodies for the work to come later. Each running session should be finished with one or two periods of strides. This will improve their running economy and is good at the end of a long run to help loosen up the legs. Young runners will enjoy these as a chance to show their speed. This is ok for their training as long as they limit the distance to under 100m.

Weekly and daily mileage should be slowly increased beginning with what is relatively easy for the individual. For a middle schooler, this may be 2 miles per day, 4 days a week. An older more experienced runner may begin with 5 days a week of 5 miles with a long run of 8. During this phase of building the base, it is important to let the athlete run at a pace where they feel no pressure to go faster. If kids run in groups, there will be enough competition to motivate them to go faster than they should without any coaching encouragement.

In the second phase, we continue to increase mileage slowly but add in one day a week of short speed work (200m) and short hill sprints (up to 10 seconds). Again, the volume of work is based on the age and running experience of each athlete. For a middle schooler, 4 repeats in one day with the requisite warmup and cooldown may be enough. For older and more advanced runners, repeats can be increased to 10 but should still be kept short. The goal of this period is to continue to increase the aerobic endurance and begin adding to the basic speed and strength of the runner. One day a week is enough for this introduction to the harder work to come. Alternating between the speed and hills adds variety to the workouts to help hold teenagers’ attention.

Phase three involves keeping the current volume of running but with increasing the length of both intervals and hill sprints. This can be as simple as having the last mile of an easy run be at a faster pace than normal. This should not be added on the longest day but can be included in other easy days. Track sprints can be increased to 800m but with a lower number of repeats than in a conventional track day. For middle schoolers, 2x800m would be enough, extending that to 4x800m for older kids. Hill sprints would be increased from 10 seconds to up to 30 seconds with no more than 4 per day. An alternative to hill sprints is simply to select a hilly course for an “easy” day. The runners get many of the same benefits without thinking they are working as hard. Again, this is a way to break the monotony. If a cross country course is available (typically hilly) this would allow a break from the summer heat and soften the impact on the runner’s bodies.

In the last phase before school practice begins, the plan is to keep the current aerobic base while adding broken tempos alternating with track speed work, then tapering before the season officially begins. Phase Four should be planned to allow athletes of all ages to have a break before their school practice begins. This is the last break they will get before the season is over. Those who have followed a plan throughout the summer will be well ahead of those who did not. When the team practices begin, they will be ready for the hard work and longer miles required for a successful cross country program.

I have seen those who train hard in the summer be in better shape than some of their teammates are at their best during the season. It is a bonus if this occurs but the goal of a summer program is to allow students of varying ages and abilities to be ready to start the season and to finish strong and healthy.

By this phase, the aerobic base and supporting strength of the runner’s body should be well developed so there is no need to add miles to the program. However, one day per week should include runs on a hilly course to continue the strength building benefits of hills as well as maintaining the base. Cross-country courses are known for being hilly whether they are repeated roller coaster hills or long climbs throughout the course so one day of focusing on a race like course has extra benefits.

Now it is time to add speed and race specific strength to the runner’s development. This is done by adding broken tempo runs and track speed work. While cross country competitions take place in conditions far different than the track, there is no better place to improve speed than in traditional speed workouts on the track.

A “broken tempo” is a run at tempo pace with a short break in the middle. This has the advantage of helping the athlete ease into tempo runs and is especially beneficial for middle and high school runners who have not yet learned pace control. They tend to go too hard early in the run and the break lets them complete at the desired pace. For a 15-minute tempo, one break of 2-minutes would be included at the 7-minute point. As they progress, the length of the break can be decreased. Always keep in mind that the total length of the workout should be chosen based on the age and experience of the runner.

Traditional mid-distance track intervals can be utilized to build speed and endurance at speed. I like to progress from 400m to 1200m through this phase. Early on speed will be built with the focus of being able to hold it longer and longer. It is also a great opportunity for young athletes to learn pacing.

The mix of broken tempos and track speed work should vary based on the athlete but a good program can be alternating weeks with these workouts. For older and more experienced athletes, one of each workout during a week may be acceptable.

As the time for school cross country season approaches, the workload should drop to about one-third or less for at least a week. Younger and less experienced runners might benefit from an easy week of one-third workload followed by a week off before official practice begins. I believe that with more experienced runners, one easy week is acceptable as the first week or two of the season practice will be easy compared to their work during the summer.

Hope this gives some good ideas on how to approach the cross country season of 2020. It has been unique for everyone with special challenges for middle and high school athletes. A good plan will help get them get back into a more “normal” schedule and be ready for the fall running season.

FM Barron is a coach with Team RunRun. To learn more about him or to work with Coach F.M., check out his coaching page. 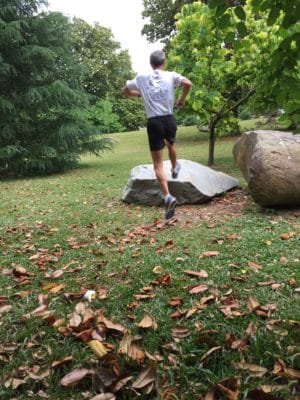