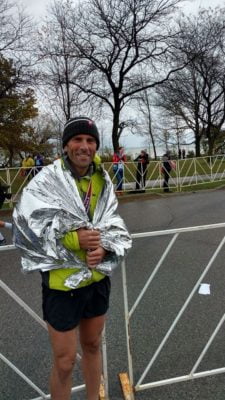 1) Course is quite favorable. Some rolling hills in the first half. Just after halfway, course heads down Red Hill Parkway dropping ~350 feet over 5K. Great cruising miles. Remainder of course is quite flat along the shores of Lake Ontario.

2) Race seems fairly popular with speedy Canadians, so even though its a smaller race, you won’t be running alone unless you are well under 3:00:00.

3) Very convenient race day set-up with spacious indoor staging area at start line which is quite nice given that it can be chilly.

I chose this race for the speedy profile and the cool temperatures likely on race day – ideal conditions for me. I did not know that Hamilton can also be quite windy. At times during the last 5K along Lake Ontario was running into 20 – 25 mph headwinds. Also had to run into wind for a few miles in the first half. I believe the day was windier than average, though apparently the race three years ago had similar if not worse conditions. Overall, though, I think the favorability of the course and the weather helped more than the wind hurt.

1- Your vocabulary will expand to include the word “escarpment”, and you will gain first hand experience with this geographical feature.
2- Hamilton bears a striking resemblance to Indianapolis circa 1988, for those who are into that kinda thing. So, take Indianapolis 1988, include progressive biking and pedestrian infrastructure, add ethnic and cultural diversity via a heavy immigrant population, and transplant the city to a more beautiful location on an escarpment on the shores of a great lake… BAM! It’s the same thing.

I did really well at pacing. Managed ~2 minute negative split. Profile of course probably provided a minute of that naturally. I remember letting a lot of people pass by me (at least 20) in the mile 7 to 10 range as we dealt with some hills and headwinds. Had specifically talked with Matt about need to run by effort rather than pace if wind was an issue, which helped give me resolve to stay back. Was fun reeling those people and more back in over the second half.

Red Hill Parkway is super favorable 5K at just after halfway. Hold back prior to this point. There is a short section of trail after the Red Hill Parkway. It was wet and a bit slippery, but pay attention and it’s not a big deal. Finally, the out and back along Lake Ontario is on a dedicated trail, but it is wide and paved in asphalt. Great running without any issues of congestion, but can get windy.

Perhaps ~40 degrees F at start. Race day high of maybe 50. May be windy, with gusts easily above 20. Given route race followed this year and direction of wind on race day, you had ~3 miles into wind in first half and then finishing 5K into wind along shores of Lake Ontario. Wind was pretty atrocious around 40K, but overall I don’t think it was a huge hindrance.

Spectators – is this a friendly course for your friends and family?

Very spectator friendly for the last 10K, which is an out and back along Lake Ontario. Dedicated cheering section could easily catch you four times during the race.

Eh. If swag is your deal, this race will disappoint.

5 stars (out of 5). I decided the check out the Canadian marathon scene after dying in the muggy conditions in Houston 2017. Not disappointed. Highly recommend this race for people that want a high probability of good conditions for running fast.