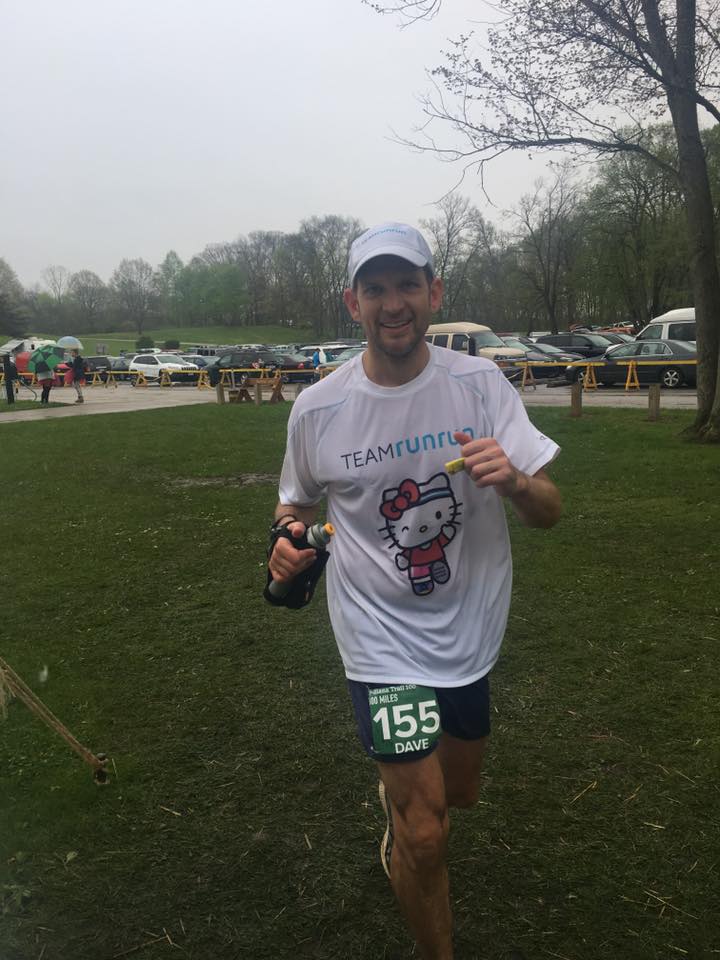 That was my mantra for the Indiana Trails 100. I had plenty of reasons to think I might not do well leading up to the race. I’d picked up a nasty cold/flu that sidelined my training 3 weeks out from the race. Just as I began to recover and a little over a week before the race I had some stressful family issues which resulted in a last-minute flight change and further limited my training. I was convinced leading up to the race not to let these things impact my performance. After talking about the importance of staying in the moment with Matt I decided to use it as my mantra for the race. All you can do on any given day is the best you can with the cards you’ve been dealt, and I hoped that the months of consistent training prior to my rough taper would carry me through.

I must have repeated my mantra thousands of times over the course of the race, both in my head and out loud. Every time a thought took me out of the moment, I’d interrupt it with “in the moment” and focus on what actions I could take to better ensure the success of my race.

I repeated “In the moment” whether I had a positive or negative thought, and I had plenty of both. The beginning of the race went well. I was on course record pace with two other runners, and it felt effortless. At twelve miles in I was on my own, despite slowing my pace considerably. It would have been easy to let my thoughts wander to what it would be like to win, or to break the course record. I wouldn’t let myself go there. I said “In the moment” out loud to interrupt the line of thought. While it was positive, it would be too easy to let myself get carried away with it and let it lead to decisions that could negatively impact my race. I could start pushing the pace more than necessary, or if another runner came from behind I could start racing them in trying to maintain the narrative I’d built. No, the smartest thing was to roll with what the day gave me and to stay in the moment, making the best choices I could in each moment with the information I had.

35 miles into the race my hips started to tighten and limit my mobility. It may have been the slick mud on the course causing an unnatural movement, or maybe it was just chance. As I started to panic, I told myself to stay in the moment, and tried to assess what I could do. I tried walking, and even stopped to stretch. It didn’t help. Adam, one of the runners I had shared the first 12 miles with, caught up to me and passed me. A voice inside my head started to say “catch up to…”, but I repeated my mantra before the thought was complete. No, I would deal with this and get healthy. I stopped at the 40 mile aid station and took some ibuprofen. It was only 3 miles to the next, so I decided to keep moving and see if it helped. It continued to get worse, and I even started to get nerve pain in my lower back. I walked most of that 3 miles, and had Jami try massaging my upper hamstrings and glutes when I arrived. Another runner passed me as I was being massaged. I suppressed an urge to go after him, repeating “In the moment”. I took more ibuprofen. It felt a little better. Eventually I could run again! Not as well as before, and not the steeper hills, but it was better! At mile 52 they had mats on the ground with foam rollers. I laid down and let Jami dig deep.

As the day wore on I continued to stay in the moment. I passed Adam at mile 86, after hearing he was more than 30 minutes ahead of me earlier. After checking to make sure he was OK my only thought was, does it make sense to stay with him and his pacer for some company? No, “In the moment”, they were moving more slowly than I needed to go. A storm threatened to stop or postpone the race. “In the moment!” Things outside of my control didn’t warrant spending time on or stressing over. The question was what, if anything could I do about it to better ensure my success? I took a heavier rain jacket and gloves from the next aid station, and continued on. The storm came at about 93 miles. A deluge of blinding rain, thunder, lightning, and wind. I could barely see and branches were falling on the trail. I decided to walk to make sure I didn’t run off the course, but before long I could tell I was losing body heat too quickly. There were still at least 4 miles to the next aid station. I started running the uphills to generate heat. I found sections of more predictable terrain I could run on. I was present in every moment, weighing my options and making the best choice I could. I finally made it to the aid station at mile 97.3. Just 2.7 miles to go! Runners were crowded in the race tent, trying to warm themselves around a heater. I grabbed some chicken broth and tried to do the same. It didn’t feel very warm. I weighed my options, and decided to fill my handheld bottle full of hot water to use it as a hand heater and headed back out into the storm.

That last 2.7 miles felt amazing. I knew I’d done it. I’d made great choices all day and I was reaping the rewards. My legs found extra energy, and I found a way to run the entire way to the finish, uphill and down. I finished in second place overall, and first masters. It was a much slower race than I wanted or than I believe I’m capable of, but I’m still incredibly proud of it. I’m also glad I finished in second place, but would have been just as happy with my performance had it been 20th. Placings are largely luck, usually dependent on who shows up and who has the most things go right. “In the moment” helped me make more things go right,  and is one of the most effective tools I’ve found for success in ultra running. Try it yourself in your next race!