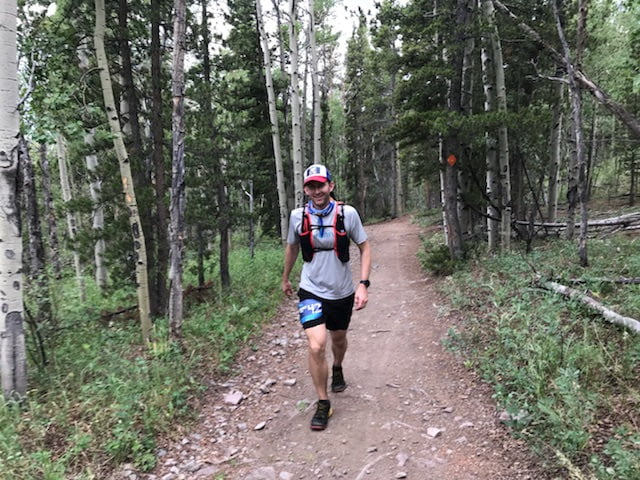 I knew this about the course going into the race, but I still managed to not love a few of the random out and back sections. When running 100+ miles in the mountains, it gets a little frustrating running out a mile and a half and then back in a section (twice). I’ve never created a course, so I’m sure it’s really tough, but that was one thing I didn’t particularly love.
I really like the RD at this race, but as a parent, I didn’t really enjoy the language he used in front of kids at the prerace briefing. I never thought I would think twice about this, but it really stood out to me this time now that I have to watch what I say around our two year old.

There was a huge wildfire just to the south of us, and it was a bit weird in one section where the wind shifted and I wasn’t sure if I should be worried or not.

I actually won a race! I haven’t won a race since winning a weekday high school track race forever ago. I was happy that I managed to go out with the lead group, fall back since I was running my conservative race, and gradually pick them off. I took the lead right around 51 and managed to hang on for the second half of the race. It was a new experience, so I was pleased that I managed to keep it together and really focus on maintaining and not blowing up. Side note – it feels really good coming into aid stations first and having everyone so amped up for you. It was a pretty awesome experience.

I need to stay in it mentally through the entire race. With roughly 14 to go, I realized I had a sizable lead and pretty much phoned it in. By doing that, I let go of the push for sub-24 which is really my only regret. If I had continued to be mentally strong, I think I definitely could have gone sub-24 on this tough course.

A lot of this course is run on jeep/fire roads. There is never a worry of getting stuck behind a conga line or anything like that. It is largely runnable with the exception of some tough climbs and a few rockier downhills. The course is an out and back course with a lollipop halfway and a few additional short out and backs along the way. You get to see the people around you a good amount, so it can be nice to know where you stand if you’re racing. This course isn’t aware that switchbacks exist. The climbs are the straight up and over variety, so that’s super fun. Oh yeah, and you’re over 10,000 feet for basically the whole race.

The mountains out by Fairplay are beautiful.

This was one of the toughest courses I have run to date. Climbing at altitude is always a challenge for me, but the climbing late after a long day was particularly tough. There are some really smooth clean sections where you can move, but the climbs are no joke.

The RD, Sherpa John, kept everyone informed about pretty much everything leading up to the race. He had to deal with monitoring a wildfire that was 10 miles south of the race with the addition of a tornado touching down in the wildfire a couple days before the race – can’t make this stuff up. Things got weird around Fairplay race week, and John at least appeared to have it all under control the best he could. I was impressed. 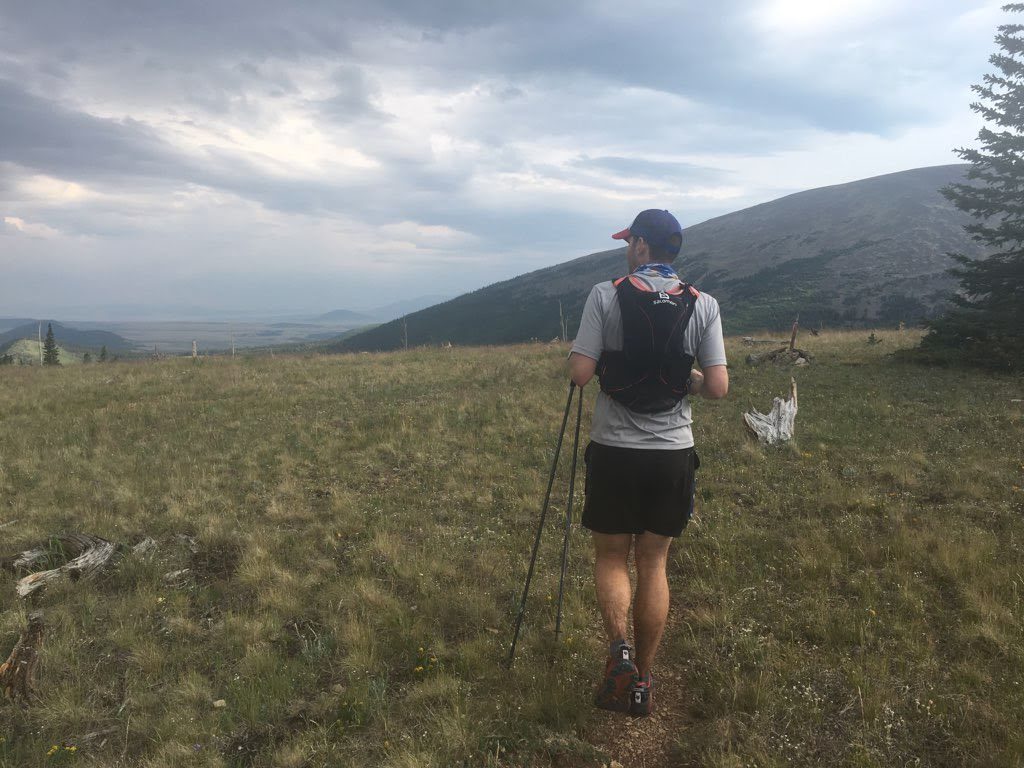 There were only 45 starters with no elites. It was a great race for me since I was with my people – back of the front pack, front of the mid pack kind of folks. There were some good guys out there though.

This one is super easy. I signed up a week and a half before the race. Fortunately, I live just outside of Denver, so it was easy to make the hour and 45 minute drive to Fairplay for the race. The start/finish was right outside the local rec center, so there were bathrooms and showers available. If you’re into it, you could camp right across the street from the start/finish by giving a small donation to the rec center. It was all really easy and convenient.

I was really pleased with the food at this race with one exception – there were no boiled potatoes. The amount of gluten free treats far outweighed the lack of boiled potatoes, so I was pretty psyched about the spread at Silverheels. The RD actually commented after the race that they would add more potatoes next year, so it’s always encouraging when feedback is heard.

It’s in the mountains in CO, so you never know. We got the typical 2pm thunderstorm which was actually really nice aside from the lightning. It felt warm for most of the afternoon with temps in the mid 70’s (always feels hotter at elevation), so the pouring rain actually felt really nice. It got cold in the night when you got up over 12,000 feet, otherwise, it was great. I could see how there may be snow in some areas during heavy snow years, but we’re in a drought in CO, so there was no snow to be found.

Given the likelihood of thunderstorms throughout the day/night, I carried my rain jacket and a midlayer in my pack for the second half of the day. When it rains the temps drop 15-20 degrees, so it is easy to get cold fast. It didn’t end up raining again, but the extra gear helped me out when the wheels fell off and I slowed down. I popped my extra layers on, and was in a pretty good place.

As someone who is still new to poles, I ended up using them in a number of sections on this course. It really helped me get up some of the tough climbs, and more importantly, they were great stabilizers going down some of the rockier downhill sections, particularly towards the end of the race.

Crew is only accessible at two aid stations, Tarryall and Poor Man’s Gulch. You go through Tarryall three times and Poor Man’s Gulch twice, so you get them 5 times total. That said, it really didn’t feel super spectator friendly, but that oftentimes comes with the territory in mountain races.

I got a t-shirt, but that was really it. Nothing to write home about.

This is a unique race. It’s by far the smallest and one of the toughest I’ve done, so if that’s what you’re after then 5 out of 5.