Nothing really, it’s a well run race that was marked well and pretty much as advertised.

This year there was still a ton of snow on the course, so the first big climb near the summit (maybe 800-900 ft. from the top) was climbing up a snow shoot. There was a rope if you needed it, but by the time I came through, there was a pretty good boot path. Then, at the end of the race we had to come down that 800-900 ft drop so it was glissading the whole way…actually pretty fun.

The first climb is generally benign (snow shoot excepting). The first descent is virtually running down a stream bed, so it’s pretty technical and difficult to make up any time. After that, things get pretty challenging through the second half with more than 1/2 the ~11,500 elevation gain (website says 14,866 ft gain, but I haven’t seen that supported anywhere) coming in the second 1/2 of the race with much of it between 9-11,000 ft altitude. So if you can reign it in early, the second 1/2 will go much better for you.

The race is quite technical in parts and at elevation so going into this race fresh and understanding the just how steep some of the climbs at altitude are would help with pacing.

This is a really challenging 50k. Even though I knew that going in, the altitude, heat and vert really combine to make this even tougher than anticipated.

As stated above, one of the prettiest courses I’ve run.

By far the most difficult 50k I’ve run…think more like a 50 mile run and you’ll be better prepared. Karl takes pride in making the course as difficult as possible and it shows.

Typically attracts strong runners since it is notoriously difficult and it has a cash purse for the winners.

Really nothing at all. I don’t think the race sold out this year although I believe ~327 people signed up for it. Very easy to get a room near by and the flight from Seattle to SLC is only about 1.5 hours and was relatively cheap.

Aid stations were great and volunteers were exceptional! One thing to note is that they didn’t provide gel packets, only bulk gel, so you needed to bring a gel flask if you wanted to get gel at an aid station. This turned out to be problematic in the morning when the temperatures were low and the gel wasn’t flowing. It costs me and several of my friends quite a few minutes trying to get gel from their container to our flasks.

Hot and dry. I think our race day capped out at about 85, but it was 90 the next day, so be prepared for hot dry weather. The one nice thing about climbing up pretty high was that it was cooler the higher you get. Also, it’s a very exposed race so be prepared to be in the sun for the majority of the race.

The majority of the field had poles; I didn’t since I don’t train with them, but if I ever decided to go back, I would really consider it.

The race is entirely on the Snow Bird Ski resort with a Gondola that friends could take to the top of hidden peak. The race took us up there twice, so it would be an easy access point for most people. I also saw people at various other points along the way, so generally speaking it’s a spectator friendly course.

This is a tough question, because it’s definitely not for everyone. If you’re looking for a real challenge, then I’d recommend it 10 of 10. If you’re uncertain, maybe this race wouldn’t be the best start. I can’t tell you how many people I saw puking at this race (more than I’ve ever seen in a race before). 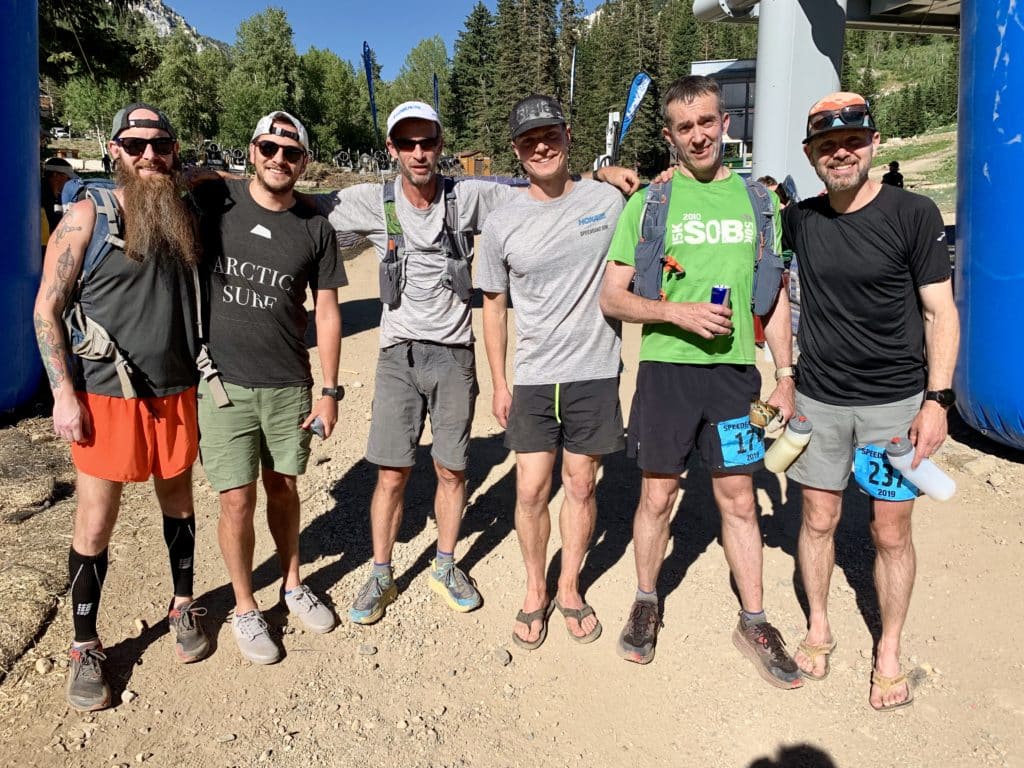