I liked that the top 3 runners in each age group were announced and called up to receive an additional medal. It was the first time I ever got to hear my name called at a race – made me feel special. Also, logistics were good – plenty of parking, easy to pick up bib. Last, I liked that they released runners in waves of mile pace. I didn’t have to figure out where to place myself at the start line. Being with like-paced runners helped me to not start out too fast, to not worry if I was going to be stuck behind slower runners or to be trampled by faster runners.

This was my first road race since moving to Arizona from Washington state. I was looking for something flat so I could test my speed. I’ve been running a lot of trail races where I don’t care about pace; however, I used to run a lot of 5ks where I do care about pace and every once in a while want to see where I’m at speed wise. This was the flattest road race I could find but it turned out to be not as flat as I would have liked. There were enough elevation changes that kept me from running this as fast as I would have liked.

Pretty normal race except for the BBQ that was held right after. I don’t think I’ve ever eaten hot dogs and hamburgers at 7:30 in the morning before and it doesn’t quite mix with hard running in the heat! Maybe cold pizza or something.

My awesome Coach Frank and I came up with a solid strategy given that I’m fairly new to Arizona and still acclimating to higher temperatures than I was used to in western Washington. Rather than pace, we set heart rate limits for each mile. For the first mile, by keeping my heart rate under the target, I was able to run at a steady pace and didn’t go out too fast which is a big tendency of mine. The second mile, I also met the target rate and was feeling really good. The first half of the race trends downhill and the second half trends uphill. I knew I had to save energy if I were going to try to climb through miles three and four and finishing strong. So after completing two miles, I had met that goal of holding back in the first half and saving something for the last two miles.

I feel good about the fact that I truly kept in mind our HR strategy and was conscious of executing it the entire race. I was very happy about that. A lot of times in racing, I get going and all concentration on strategy drops and I get caught up in the moment. Unfortunately from mile 2.5 to 3.5, the accumulative effect of the heat caught up with me and due to some nausea, I could not kick it up a notch as planned for that interval. However, I employed all my mental tricks to just hang in there and keep on going, no matter what. For example, there was this older woman just ahead of me and I could tell from her breath she was struggling but she kept managing to stay in front of me. Thinking she might be in my age group, I just told myself to keep pace with her and then when we crested, since I didn’t seem to be struggling as much, I should be able to pull ahead. Which is what I did. So she helped me up that climb. Looking at the results, she was actually not in my age group but I sure appreciated her help! The last 0.5 miles, I was finally able to push more and finish that last half mile strong.

I think for these short road races, I need to eat less breakfast. Both during this race and a couple of weeks ago during my mid-week hard workout, I got to feeling nauseous. My breakfast might be contributing. With all the trail running I’ve been doing and having to stay fueled throughout the long miles, I get mixed up how much/little I should eat for a shorter effort.

There are several elevation changes on the course. I heard other runners prior to the race talking about this, giving a “warning” that it’s not exactly flat. I think because the race is in the city, along a “river” (dry gulch mostly), there is an expectation that it’s flat. But what happens is the path has to dip under the major city roadways, then come back up. 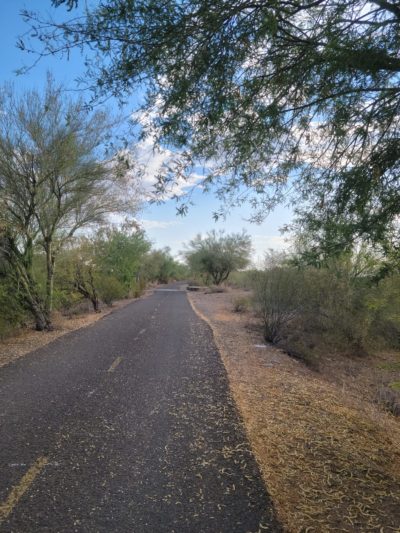 Well I’m used to the green beauty of Washington state. There’s a lot of brown but there are green plants growing amidst the brown in the gulch. It’s pleasant but not what I would call pretty. Plenty of rabbits and birds roaming around.

In the scheme of things, it is not a tough course, but again it’s not flat so I still struggle a little bit with that combined with the heat aspect.

The race was pretty organized. No issues getting bib. The only problem I had was right before the race, they were making some announcements on the speaker and I couldn’t hear everything that was being said. They were saying something about starting the race in waves because the start of the race is over a narrow bridge. But I couldn’t hear the details of those waves and had to ask someone near me.

After the race, there was a BBQ with hamburgers, hot dogs and veggy patties along with the usual post-race snacks. No lines to get food, plenty to go around.

The top male ran at a 5:09 pace and the top female at 6:33. There were 362 runners that finished so one of my larger races since the beginning of the pandemic. Being in an older age category, half the time, I place first in my age group. But the winner in my age group ran a 7:06 pace which I’ve never experienced before, way out of my league.

This race is near Phoenix. I just drove from my new home. I would think it’s just something for locals. Signup was easy. That’s all I know!

It was only a 4 mile race. I really wouldn’t have expected much but there were 2 aid stations, one around the first mile and the other at 3.5 miles. Water and Gatorade.

Starting out the temp was 84 and at the finish, 87. There was cloud cover at times. Considering the averages in this area, these temps were on the lower end, pretty ideal for this time of year. I heard some locals commenting that it was less hot than usual.

It’s a pretty and well-maintained park where one could happily hang out while the runners are racing.

The usual. Big heavy metal medal. Then I got a bottle can opener as my 3rd place finish medal.

I would give it a 7/10. It’s always fun when there is a big field of participants. There was every kind of runner and a very friendly inviting atmosphere. When they were announcing the winners in every age group, you could tell a lot of people knew one another, shouting out names in greeting.

Need a checklist to prepare for your next race? We’ve got you covered.