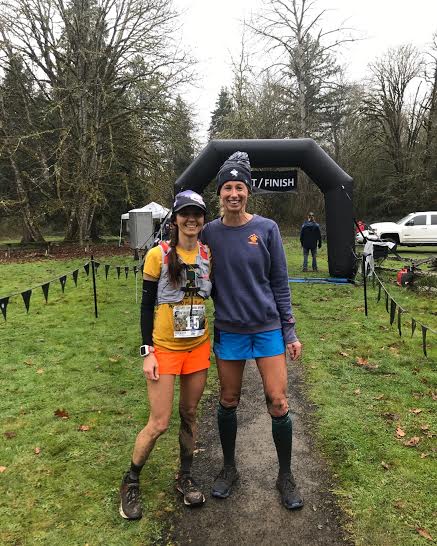 1) Small, low key feel, but also very professional timing system and organization.
2) Would make for a good family friendly event since it is loops and you could see your family frequently. If the weather were good, lots of trails and open space for kids.
3) I ran the entire race with Janessa Taylor and it helped the time and loops pass much faster than if I had been alone, and I think it made me keep an honest effort when my legs were tired and the mud got worse. It was a small race, so the fact that I found a person to run with was a great coincidence since neither of us knew the other would be there.

1) The mud. It was pretty insane. There were some areas where you just could not get any footing, and because it was a loop course and there were other race distances that began an hour and a half after the 50k start, it got worse as the day went on. Some of the worst muddy sections had two way traffic where you could be passing runners going the other direction, so the limited places to find footing were even harder to come by. There were also three huge puddles per loop, so you run through shin deep water 18 times.
2) It is loops- this is convenient for gear and self crewing, but it is mentally challenging. Each loop is 5.2 miles, and I would say the 4th and 5th loops were the hardest mentally. The 6th loop you know is your last, so that one is less mental.
3) Within the loops there are some out and backs and some two way traffic, so it can get a bit confusing especially when the other races begin.

Going with mud again. So much!

Worked together with Janessa and despite the mud and pretty much non-stop conversation, we both ran 50k PRs. I think there are definitely times for racing against the other runners and pushing each other all the way to the finish, but I think when you are using races as training runs, there is also a place to work together and enjoy conversation while putting out an honest effort. I felt like we did a good job of keeping it fun and friendly, while working hard enough to get what we wanted from the day.

I don’t know if the mud is a huge factor every year, but I can imagine since this is a February race in Oregon, it probably is always an issue to some extent. Because of this I suggest trail shoes with good lugs. Also, a towel for after if you want to save your car interior for the drive home.

Gear- I carried a hand bottle and Janessa wore a pack. She did not have to grab anything from aid the entire race, I swapped out a bottle half way through. I liked going light, but at times I wished I was totally hands free and did not have to dig around at my bag at the tent for extra fuel. I thought I would add drink mix to a bottle mid race but we spent such short time in the aid station I never had a chance to do this, and so my calorie intake was on the lower end. You can place a bag at the timing mat tent at the start/finish, so if you are organized, it can be an easy way to self crew.

-Knowing how the loops work- there were few times we almost missed turns or went the wrong way and were saved by a guy who had done the race before.
-Mentally- prepare for the mud and the loops.

You can access a map of the course from the website, but I don’t know how helpful it would be. Since it is loops, you can get a feel for the layout after running a loop or two. I am not sure if it is always so flooded that there are shin deep puddles, but this year we had to cross through pretty high water each loop, so you will have wet feet the entire time. By the last loop I had a pretty good amount of gravel in my shoes.

The course is at Elijah Bristow State Park-it is along the middle fork of the Willamette River and has a combo of wetlands, forested areas and meadows. Very Willamette valley Oregon- green, wet, muddy. It is pretty but there are no big mountains or spectacular views.

It is very flat. Even with the mud I ran my fastest 50k here, but in a way, the constant running to me feels challenging. I prefer hills to break up the running and change the muscle groups being used, so for me, keeping a faster effort is in ways harder than more hilly courses. The mud can be both physically and mentally frustrating.

Yes, the race feels very well organized. There were some confusing points on the course that could have been a bit clearer, but overall a very well run race. The 50k was fairly small, but the other three races had quite a few runners, so I think most people opt for the shorter distances.

Some of the other distances seemed to be more competitive than the 50k. I think local runners use the 5 mile, 10 mile, and 25k as good speed workouts. Like any race, it probably varies year to year in who shows up.

Like the 6 hour I did in December, I signed up the night before. I happened to be visiting family in the Valley and when I saw this race was only an hour away, I decided it would make a good long run. You can even sign up race day. With how popular many races are becoming, I love the fact that there are still some that you can decide to run on a whim.

Some Gu and water/sports drink, plus a few of the standard spread. I did not notice too much what food was out since I was running self sufficient, but I was wishing there was coke on lap 6 when I just needed a quick 50 calories and burst of energy. There is a water aid part way through the loop, as well as a main aid station at the start/finish of each loop.

Again, I would recommend trail shoes with good lugs.

Very much so- there are a couple road crossings I saw people spectating from, as well as the start and finish area that you go by each loop.

Nada. You can buy a shirt, but otherwise, nothing. The race is cheap though. Entry was $55 (more like $60 with fees).

This is hard to score- for me, loop courses are not what I would normally choose- though my last two races have been loops, but I chose both them just because they were races I could do on a whim and I happened to be in the valley on the same weekend as them. I would not choose this race specifically to do if I were not over in the valley. It would be a good race to run a fast time if your body can handle the mud. There are not many ultras available this time of year in this part of Oregon, so I would recommend it for a good training run to practice fueling or pacing since it is loops or simply to get in the miles. I prefer races with big views or a mixture of climbs, so for me, the race is more a 6 or 7 out of 10. But it is a well done race with a great friendly atmosphere, and if the weather were better, it would be a fun venue to hang out afterwards. I might recommend one of the shorter distances more, unless you want to run 6 loops of mud!

Ashley Nordell is a coach with Team RunRun. To learn more about her or to work with Coach Ashley, check out her coaching page. 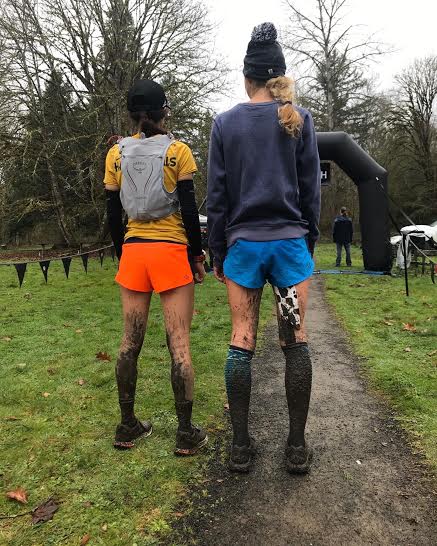