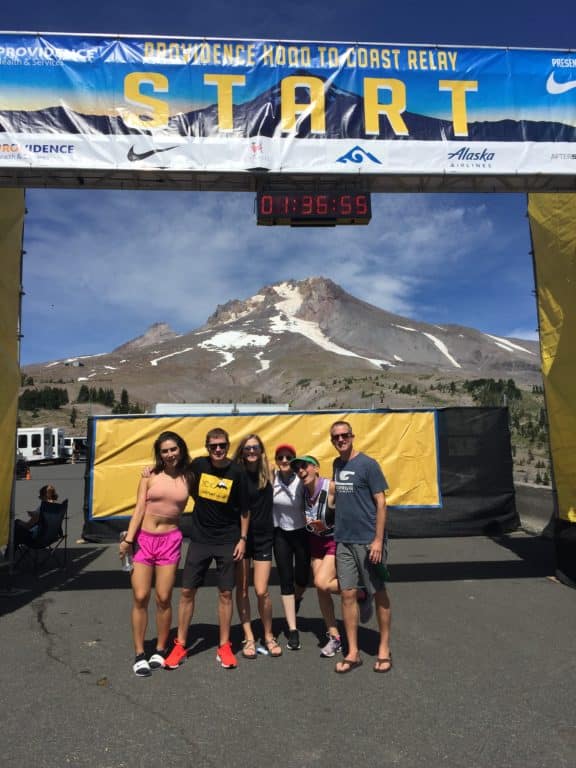 I’ve been running this race for 35 years during which I have run over 105 total legs and am a member of the inaugural Century Club, so there are way more than “3 Bests”. Relays are fun. What other race do you get together with running friends for a day or two running across a state or just down the road?

It is a team event. Running can be such a solitary endeavor, so a relay is an opportunity to run as team where each runner is dependent on the other.

The challenges. 199 miles using a team of 12 runners running from Mt. Hood to Seaside, Oregon. Each runner does 3 runs averaging over 6 miles per leg in an 18 hour period. Sleep deprivation and its effect upon your performance is real which in my case meant sleeping for 90 minutes in a 38 hour.

Traffic. The race has 1400 teams each of who uses 2 vans, so that math works out to 2800 vans. Even though teams start as early as 5:00 a.m. and the final wave of teams leaves at 2:00 p.m. Highway 202 in the Oregon Coast Range might as well be the 405 in Los Angeles. The backup means many runners on the faster teams (sub-27 hours) have to run a mile or so up the road to the exchange before they begin their final leg. When you have already run 12-13 miles hard this is a black mark on the race. When the RD prioritizes their financials over the quality of the race and assuring the enjoyment of the runners, it truly is a negative.

Running at 2:00 a.m. down a dark road in the woods with little to no homes while ahead of you and behind you are other runners with headlamps and reflective gear.

My van which had 4 rookies to the race one of whom wasn’t even born when I started running the race. It is odd that most sub-masters (age 30-39) were not born when I first ran the race in 1985. The rookies were awesome, as was the other veteran in the van. No one had an attitude, everyone pitched in to get us from Mt. Hood to Seaside.

Make sure and eat a good mix of protein and carbs within 30 minutes of finishing your leg. It really pays off on the third leg. Skip the easy calories of cookies, Pop-Tarts and energy bars as a means of fueling you. They aren’t substantial enough.

After 35 years there really isn’t anything to learn.

If you are running any of the first three legs on Mt. Hood do some downhill specific training. It makes it much easier come race day.

At times no. You run down Highway 26 from Mt. Hood to the outskirts of Portland. It’s a highway and while there are some scenic vistas, they are behind you. You then run along the Springwater Corridor, which can be scenic, but can be well…we have a homeless problem in Portland. After a quick run through downtown Portland it is back onto the highway heading from Portland to St. Helens. Who likes running along a highway? No one.

The course eventually gets scenic when climb out of the Columbia County Fairgrounds and head into the Coast Range. For the last half of the race the scenery of forests, open valleys with meadows, cattle grazing and elk make the miles pass pretty quickly.

The challenge is running three times in 18 hours while spending most of the time between legs sitting in a van. Add in the lack of sleep and less than desirable meal choices with a full compliment of nutritious items, and the toughness is infused throughout the race.

Overall it is well organized and run, but even as I write this I shake my head. The race has been put on for 38 years and yet each year there is some problem with the leg descriptions in the booklet. It doesn’t matter that there were no changes to the leg, there is a problem that requires an email from the race director. Then there was the shirt snafu this year in which they ran out of large shirts at packet pickup. Since everyone has to register well in advance and give their shirt size, this is baffling.

We were 80th in 26 hours 12 minutes. That is an average of 7:54 per mile. So yes, from my perspective the field is strong when nearly all the top 100 teams run under 8 minutes per mile that is an indication of a strong field.

Registration is by lottery in October the year prior to the race. Hotels and vans are booked up as well. You have to be on it even before the race registration opens because if you wait until you are accepted it gets much harder to find hotels or homes by the finish and vans to get you there.

A fairly new addition to the race in the last few years are water stations on any leg over 6 miles. The water station is at the midpoint of the leg.

It can be cool and cloudy at the start on Mt. Hood to sunny and hot. This year it was sunny and hot. Then when you get to the coast range the next morning it is usually cloudy and cool in the morning before becoming typical comfortable beach weather by the afternoon when you reach the beach. So in sum be prepared for everything.

Nothing special is needed but runners are required to wear a headlamp, a reflective vest and have two flashing LEDs (one on the front, one on the back) from 7:00 p.m. to 7:00 a.m.

You get a Nike Dri-Fit shirt, which is of nice quality, and a finishers medal which also has a bottle opener, but beyond that you get nothing

I’d give the race 3 stars out of 5 this year. Why? By allowing 400 more teams in they created traffic congestion that had previously been resolved using 1000 teams spread out over 9 hours. An increase of 40% in the field size was going to create traffic headaches and they knew this. Plus, they tout being a Certified B Corporation, which is a corporation which is supposed to evaluate its environmental impact in its endeavors, so who thought adding 800 vans to narrow roads where they would idle and spew carbon monoxide was going to be a positive environmental impact?

It calls itself the “Mother of All Relays” and it really is, so yes I would recommend it to others.

Larry Merrifield is a coach with Team RunRun. To learn more about him or to work with Coach Larry, check out his coaching page.