-I got a bee sting in the first three miles.
-I fell early in the race (but that was my fault and could have happened anywhere).
-More portapotty locations (at aid stations on roads would be nice); there were 3 locations, but my GI doesn’t like ultras.
-The part that repeated (30M on the PCT) wasn’t as scenic as I’d hoped, but maybe I was just tired.

It’s not weird, but there’s zero cell coverage anywhere (start, finish, major aid stations), which makes it a bit tricky to plan with crew and pacers. And the one-lane forest road to the start/finish is a little dicey.

This was my first attempt at the 100-mile distance, and I was worried about cutoffs. I really wanted to get that buckle! I was thrilled that I was able to finish strong and get that buckle with a little over 2 hours to spare. I’d been around 1.25-1.5 hrs ahead of the previous cutoffs (miles 26, 55, 70), so I was really glad to expand that a bit in the home stretch. I think I paced myself fairly steadily, and I had enough left in the tank to run in the last 10k or so. I wound up passing people that I hadn’t seen since the earlier part of the race.

This was my first hundred, so I don’t have any pro tips to share. Just the usual stuff: don’t start too fast, keep eating, drinking, and always moving forward. Avoid chairs and warming tents! I never sat down except in the 4 portapotties along the course.

Pacers and crew are awesome! Line them up early and have backups too. Have more liquid calorie options that I can suck down quickly when I don’t feel like eating anything; baby food pouches are helpful for drop bags, they’re bulky to carry. (Because I planned to eat a good portion of real food, I found I didn’t really bring enough gels once I couldn’t stomach solid food after about mile 40.)

Double-check batteries and lighting in advance; I forgot the proper battery for my Kogalla light and had to use a USB pack, which died after about 3 hours. I had backup, but it wasn’t nearly as bright.

It’s well-marked. The first 26 miles is the most scenic part (I think), unless you can run miles 55-70 in the light. 11k elevation change doesn’t sound like a lot over 100M (and isn’t compared to many mountain races), but it still adds up. Most of the race is between 3000-5000ft elevation (high point at 5700ft), so the weather and temperatures can vary quite a bit throughout the race.

Yes, though most of the “Mountain Lakes” are in the first 26-mile loop, except for Timothy Lake (miles 55-70), which I ran in the dark. The lakes are gorgeous! The race bills itself “One of the country’s most beautiful 100-milers.” I’m a jaded Northwesterner because we have so many spectacular places here, so I thought the 30 miles that repeated on the Pacific Crest Trail (miles 26-55, 70-100) were not that amazing. Pretty enough, but kind of the standard PNW forest with occasional views. The start/finish at Olallie Lake with Mt. Jefferson behind it is stunning!

For me, yes. 100 miles is tough. For a mountain/trail 100, it’s probably comparatively “easy” – that’s why I picked it as a good first one. But it was still plenty challenging for me, and it has quite a few rocky/rooted areas that aren’t particularly runnable, especially when being careful not to fall. (In typical fashion, I fell on the road part instead—just when I let my guard down.)

Go Beyond Racing puts on awesome races. I have been very impressed by all of them. Well-organized events, well-marked courses. I also appreciate how they reduce waste by having a cupless race, incentives for carpooling, and reusable mugs at the finish line.

It’s a popular race with a lottery entry, capped at 170 spots. I think you register in January and the lottery drawing is the first week of February. I think in 2018 (when they instituted the lottery, I think) and 2019, the waitlist has cleared, so you can probably get in if you train and are willing to wait. I started at #37 in February and got in in late July. Trail work (8 hours) is required by Sept 1, so do that early. It was a scramble for me to complete when I got in off of the waitlist with an already-booked August calendar (but I should have done it before I got in).

If you can book the Olallie Lake Resort (at start/finish) right away, that would be awesome. There’s nothing else near the start. We stayed in Government Camp on Mt. Hood, which is about 1.5hrs away (though 30mins from the big aid station at mile 55/70).

I had to carry all my own food due to my delicate GI needs (celiac disease), but they seemed very well stocked. I was grateful for the broth in the night hours! They had GU gels and hydration, which I’m not a fan of. It looked like they had quesadillas, sandwiches, and the usual ultra fare. The night aid stations had festive lighting, costumes, and music, especially the Timothy Lake Dam – wow! The volunteers were awesome!

I think it varies a lot from year to year. It’s the autumn equinox weekend in the Oregon mountains, so it could be summer, fall, or winter – or more than one season in the weekend! I think we generally lucked out with weather this year – no snow on the course. It was about 38 degrees F at the start (8am Sat), but it was clear, sunny, and quickly warmed up to the 70s. It cooled off once it got dark, maybe in the 40s at the higher elevations and 50s around Clackamas AS/Timothy Lake (mile 55-70, overnight for me). It started raining by mid/late morning, but it didn’t get hard until after I finished (noon).

I found poles to be helpful, especially for the climb back up to Olallie Lake in the last stretch of the race. But I carried them for the whole time and used them sporadically even in the early parts, on more technical sections. When I left Olallie Lake (mile 26), I needed to dress for the heat of the day as well as the transition into night (warmth, light)… so I basically needed to carry all the things for that 30-mile stretch to my next dropbag/crew spot. (My friend didn’t have her jacket with her, and she got really cold in those last few hours.)

It’s a beautiful area, but pretty much the only place to see runners is the start/finish/mile 26 (Olallie Lake) and mile 55/70 (Clackamas Lake)… and it’s about a 1.5hr drive on slow roads between them.

I love my buckle!! And a finisher’s pint glass. They also have long- and short-sleeve tees (technical and non), hoodies, beanies, etc. available for pre-order and for sale at the race.

4.5 stars – yes, I would definitely recommend it to others. 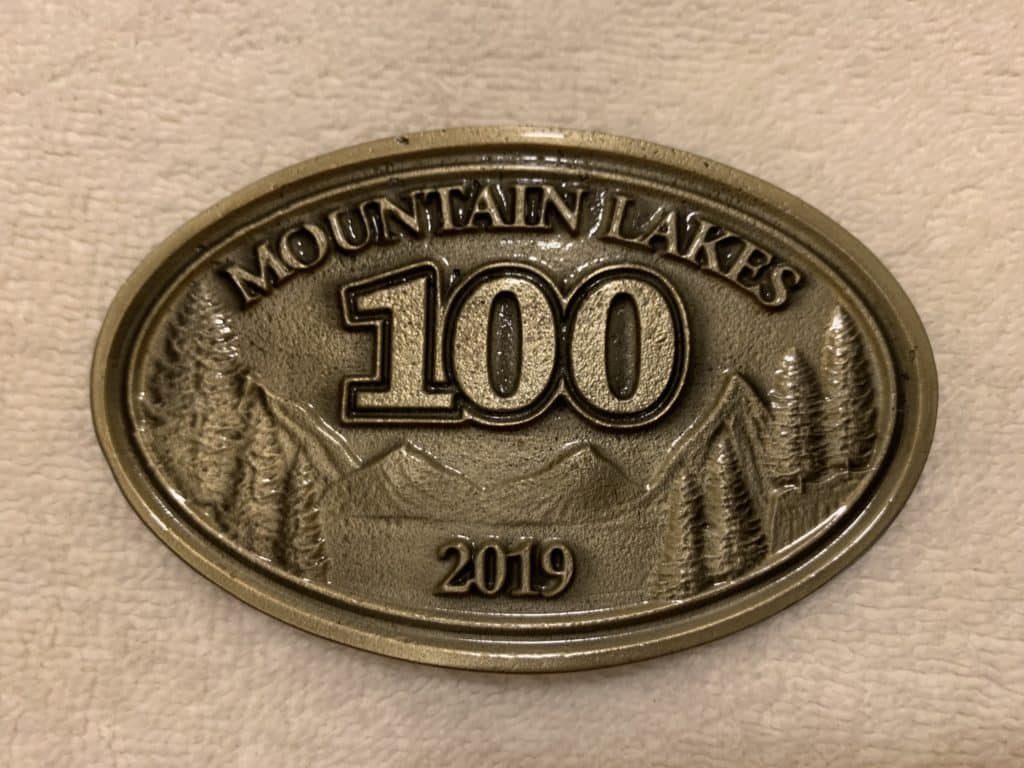