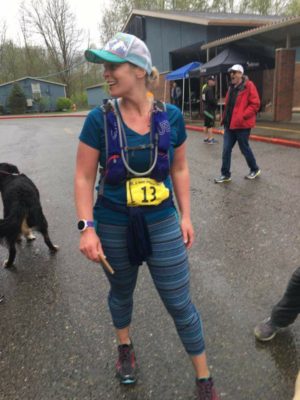 Scenery, a manageable non-technical trail, and aid stations that were plentiful

A couple spots the straight flat course was mentally draining – you could see miles ahead, so it was a little mind numbing.

I did the early 5 am start, and found it a little funny the race director (although I was so excited it was a woman!) didn’t say anything before the race! I get it was a straight forward course, but 13 of us checked in, lined up, and she did the official countdown, and that was it! We followed a bike to get to the trail, and took off. I was comforted by the fact that I had run portions of the course before, but I feel like it might be unnerving to start in the dark without a little pep talk. Also, the race packet! There was none! I drove to Bellevue thinking I’d get my bib and likely a little bit of swag or stickers or something, but that was it! Just the bib! Oh well. I ended up buying their shirt after just because hey, it was my first 50!

I successfully ate every 30 min, hydrated well, and for the most part ran at the pace I had intended to run at. Highlights of the race were getting to run through the spot I was proposed to (awwwww!) and getting paced with the one and only awesome Josh, and my kick-ass sister Maria! To have those two hunker down with me for the most ouchy parts was pretty awesome. And, every time it was time to run again after an aid station, or a few minutes of walking, they let me swear at them and they just kept smiling 🙂 I enjoyed, like I have experienced and seen in all ultras, how supportive other runners are of eachother. That’s what this is all about! I eventually got passed by the top runners, and EVERY single one of them said good job, you got this, etc. or something to that effect. I love that.

I think the 5am start was the way to go for me, or any other runner concerned about finishing in time. It also helps you squeeze in miles before it has the potential to get hot, because it’s a pretty exposed trail. The start and finish is at the same spot, so easy and convenient if you drive yourself. Don’t bother picking up your race bib ahead of time – they were well organized, it would’ve been no problem to just grab morning of.

Of course I would’ve liked to run my second half of the race faster than the first, but just wasn’t in the cards my first time around. I was tired! But knowing what to expect for next time I might be able to attack it better. I needed more salty food – I was not prepared for that, luckily the aid stations were. I had to gamble and try some new stuff race day because the sweet stuff was just not going to go down well, so I’ll be practicing with that next time.

Don’t blow it in the beginning – duh, I know. We all know that! But, specifically, the slow steady uphill eventually catches up despite it not looking like much on the elevation profile, so stay patient getting through it so your legs are in good enough shape to run a strong second half, because it’s an easy enough course some of you fast runners could place, PR, etc out there.

It’s flat and mostly gravel, but I really found it beautiful. Lots of bridges and waterfalls underneath, open farms, some forest-y parts, and a river to follow throughout.

I will always think running 50 miles is difficult, but compared to most no, it’s not. It has a slight uphill slant for the first 30-ish miles that starts to feel unrelenting, but then you get to run down that when your legs are more tired. 2,500 feet of elevation gain on non-technical trail.

For the most part – yes! A few of us runners got to the second aid station before they were set up, but that was ok so early in to things.

Only 30 something runners participated in the 50, and 29 of us finished, so it’s a smaller race. There were a couple fast front runners, but otherwise, didn’t seem like it. There was a relay, 50k, and 25k also going on, so maybe in those races?

Nope!  Just a simple sign up online and you’re in!  If you live in Seattle, no need to book anywhere – it’s about a 40 min drive to the start line, but sleeping in your own bed made that part seem worth it as opposed to renting something closer to the start.

Great volunteers, and the usual potatoes and salt, candy, pbj, pop, water, tailwind, etc. They were nicely spaced out, and plenty of them!

Expect a typical rainy spring day. I lucked out with cool weather, and not a lot of rain. If there was a freak hot day, it would make it a lot tougher because the trail is pretty exposed.

Nah – just your usual stuff that you’ve practiced with! No crazy river crossings or anything

Yes – lots of easy places to get to to cheer – rattlesnake lake was probably the most popular spot – then friends can hike in between seeing you run through there again!

5/5 stars. A good first 50 miler for someone, or a fast confidence boost for the seasoned runner. I really enjoyed the race all together!