Pre-race: Fiancee and I drove from Los Angeles to San Diego the day before the race. We had picked one of those budget hotels to spend the night instead of waking up before the crack of dawn and driving two hours.

Weather: Southern California had been experiencing the “Pineapple express” for the past several weeks. While it seldom rains on a typical SoCal winter, there’s now snow in the hills, LOTS of water in the creeks and rivers of mud in between. SoCal is basically a desert that’s been urbanized over the past 150 years. When it rains, everything goes to hell in a hand basket. 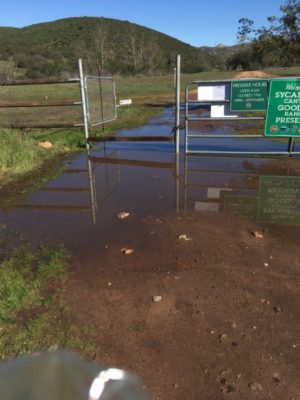 The night before: It sucked. We went to bed around 9PM and got awakened around 1AM but the local Sheriff force knocking at our neighbor’s door. The guy put up a fight. Sheriff officers did too. The ruckus lasted until about 3AM until they left. We went back to sleep until my alarm went off at 4am. So, yeah, it was rough. Morale of that story: spend the extra cash to get a better hotel next time. Seriously. Your credit card won’t be happy but you won’t get stabbed in the middle of night. And you’ll get to sleep.

Race morning: It was cold. Real cold. “This wasn’t on the brochure” kinda cold. 32 degrees (yes, we are wimps here). Weather report read that midday temps were forecast to go as high as 55 degrees so I put on Salomon shorts, arm sleeps, gloves and a beanie.

Drop bag & nutrition: Since runners would always come back to the “top” of the figure 8, I had prepared a drop bag with lots of food (cheese sticks, hummus, chips, PB balls, ritz crackers) to munch on. All I carried with me on the laps was my handheld bottle with water and electrolyte. Food was also available at the halfway point. The aid-station volunteers there had anything from pickle juice, ginger ale to peanut butter and jelly sandwiches. And beer, if you asked nicely (beer is magic, really).

Reality check: I had trained my butt off the months prior adding a lot of hill repeats in my training and really felt confident. The one thing I didn’t factor in was the creek crossings and the mud. I am a short guy and some of the creeks had high water (crotch level). The shock to my gentlemen, um, “parts” was quite unpleasant. And each crossing did slow me down considerably. Dealing with the mud too. At 7AM, the mud is still frozen from the night before. 3 hours later, it’s one step forward, 5 steps back.

Two laps to go: I started feeling really tired. Yawning like crazy, heavy eyelids, the works. It’s never happened and I wasn’t sure what was going on. Maybe the lack of sleep from the previous night? I switched to run-walk until I finished lap 3. When I got back to my drop bag, I ate one gel, one PB&J sandwich, a slice of watermelon and one cheese stick.

Last lap: It went well. I felt refreshed. I kept moving at a 9:45 pace. At mile 28, my watch read 6 hours 51 minutes. Only 4 miles to go. I guestimated a 7 hours 30 minutes finish. All was going well until this crushing fatigue came back again. Yawning like crazy, heavy eyelids, etc. That’s when my stomach started to go. I barfed several times. After I was done, I started walking and switched to run-walk but my stomach turned on me again. Barfed some more. I switched to power-hiking. Barfed so more. It took at me over an hour to do the last 4 miles (expletives deleted).

Finish: The last mile is just a straight uphill. I powered-hiked it and stopped to barf a couple more times. 32 miles in 8 hours 29 minutes. (https://www.strava.com/activities/2170640823)

Lesson learned: Don’t mess with nutrition on race day. I simply didn’t have enough glucose (gels!) in my system. This is what caused the low blood sugar crash. The worst part is that I knew it. A bad case of tunnel vision on race day is the worst.

Lesson learned: Expect the unexpected. I didn’t expect the poor trail conditions and it really shook my confidence.

Lesson learned: You will have highs and lows. At your lowest, simply smile. The high is around the corner.