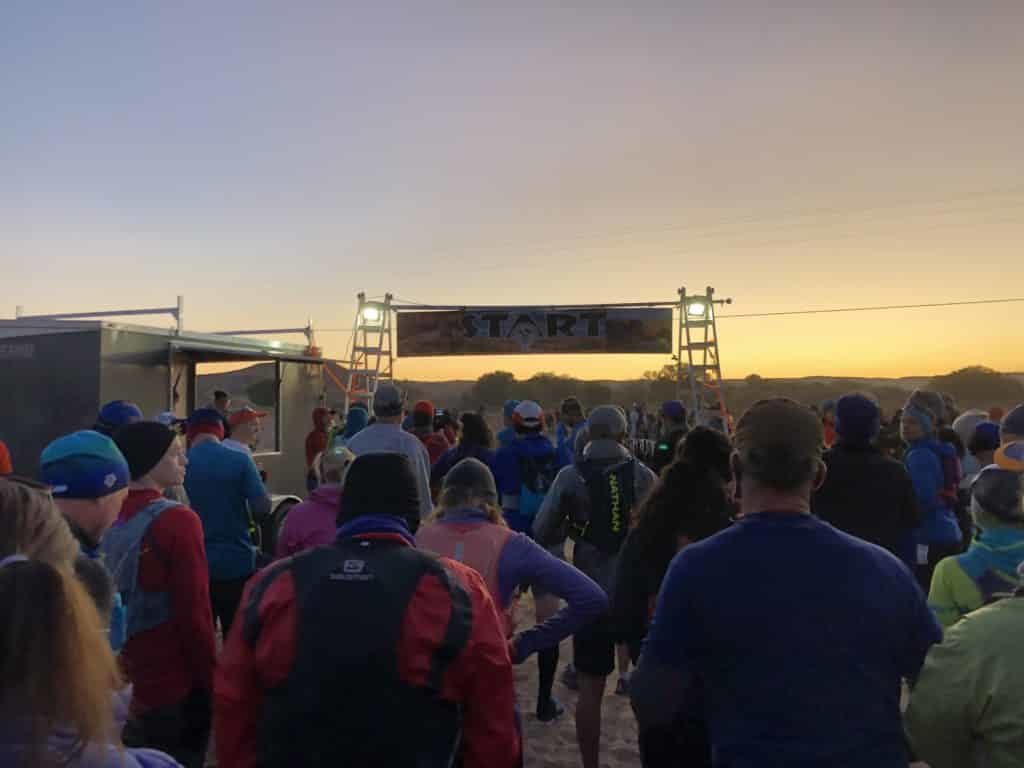 – Being able to run the canyon trails without a guide. The trails for the race are normally off-limits to non-Navajo.
– The intimate feeling of the race environment. There was a maximum of 150 runners, so it felt like an extended family. Locals were cheering everyone on and the volunteer support from the community was great. Shaun Martin and his family were basically doing it all and given it all for the race weekend (from setup of the course, start line, making the finish line food)
– The scenery was incredible. Even though the deepest part of the canyon we were in was only about 1200 feet (not on the scale of the Grand Canyon), it was still amazing to be running next to the sheer canyon walls.

The race itself was run very well. My comments are more about the aspects not related directly to the race.
– Depending on where you fly into, it takes time to get to Chinle, Arizona (6.5 hours from Tucson, 5 hours from Phoenix, 4 hours from Albuquerque, 6.5 hours from Las Vegas)
– Restaurant choices are limited in the Chinle area (mostly fast food). There is a good sized grocery store in Chinle (Bashas’ Diné Market) with a good selection. The restaurant at the Holiday Inn was slammed the night before the race. So, just be prepared.

Being encouraged to yell in the canyon, as a form of celebration, and then hearing other people yell with you.

Getting into Chinle a few days before the race and trying to acclimatize and figure out where everything was, cut down on the stress level for me. I enjoyed the pre-race meeting and learning about the canyon and the Navajo culture – made it more meaningful than just running another ultra in my mind. The route was an out and back: 17 miles from the start line to the Bat Canyon turnaround. After the sandy part through the wash, it was mostly hard pack roads / trails with the occasional dry stream crossing / rocky sections. The turn to Bat Canyon was just past Spider Rock (amazing to see a sandstone spire over 700 feet tall). Climbing up Bat Canyon was the only real technical portion of the race, but it was short (1200 feet of climbing for about a mile). Even though we went back out the same way we came in, the canyon looked completely different. Also, the finish line food options were pretty good (all the fry bread and mutton (or veggie) stew that we could eat).

– It could be cold at the start: it was in the mid 20’s this year.
– Be prepared for running (or more like slogging) through 3 – 4 miles of sand at the start (and the same at the end of the race). I used standard trail running gaiters to keep the big rocks out, but my shoes filled up with the fine sand particles.
– There were some crusty parts, but they gave way pretty easily. This year, it was dry, but in past years it has been wet in the canyon. If it is a wet year, be prepared for water running through the canyon and getting wet in the stream crossings.
– Stay on top of your hydration: cooler and high elevation, it was easy to get dehydrated.
– Limited cell reception at the start to pretty much nothing in the middle of the canyon.
– GPS reception was mixed: depending on your device, you might be able to get enough satellites in view for a fairly accurate location / distance information. But everyone seemed to have different distances.

Now that I know about the limited restaurant / food options, I would more likely bring food for race day.

– The course is pretty flat for 16 miles (minimal elevation gain) before the Bat Canyon climb.
– Being mentally ready for slogging through sand at the beginning, a few spots in the middle, and at the end of the race. Running on sand is probably less than 25% of the distance, but it can be a challenge (like a steep climb).
– The climb up Bat Canyon trail involved going over / around rocks (basketball sized to car sized boulders) before you get to a smoother section, and then the last scramble up a sandstone ledge (helpful to use hands to just get tactile feel on the rock).
– This year, the jeep roads and trails were hard packed and dry, so it was easy to cruise, but my legs took a pounding.

Yes, it was incredibly beautiful running on the canyon floor. Going around the corners and seeing something new or popping in / out of the cottonwood trees was great. The view at the top of Bat Canyon was breathtaking. I was stopping multiple times to take pictures.

Not really. Flat course with gradual elevation gain until the climb before the turnaround. The weather was great: no rain, cool at the start, but warm (60’s) at the end, so that was not much of a factor.

This was the seventh year of the event, so it was pretty well organized. Shaun Martin is basically running the show with support from his family (and the community). It also helped to go with the flow and not get stressed out about things running on “rez” time,

There was a group of strong runners (mostly local) that were vying to win (or win their age group). Otherwise, there was a mix of first time ultra runners, first time runners in the canyon, and experience canyon runners.

There is now a lottery to get into the race (before the lottery system, I heard that signup caused the Ultrasignup website to crash). Here’s how it basically worked: you signed up on Ultrasignup in Feb, for the race October. After the lottery closed, all the names were printed out and cut into strips. The strips were then placed into Shaun Martin’s Mom’s stew pot. Then Shaun did a live drawing on Facebook. Anyone not getting a bib, was put on the wait list (not sure how that order was established) which was about 650 people deep. Seemed like there are decent hotel options (Holiday Inn, Thunderbird Lodge, Best Western, and Cottonwood Campground), but it would be smart to book as soon as possible.

Three aid stations (two you stop at on the way in and out and one at the turnaround). They were spaced out every 5 – 7 miles (White House, Bubble Man, and Bat Canyon). Drop bags were available at the turnaround.
Pretty standard fare: salty snacks (chips, pretzels), fruit (watermelon, bananas, oranges), peanut butter and jelly sandwiches, candy, Tailwind, and water, pickles, and energy gels.

This year, it was pretty cold before the start of the race (mid-20’s, so a puffy, insulated jacket was good to have). Weather during the day was very sunny and warm (mid-60’s), but if you were in the shade in the canyon, it could be cool. Since it was dry, it was dusty.

Nothing special needed. If you don’t like your shoes filling up with sand, you can try using those desert trail running gaiters. Definitely have a camera.

Not really many points to spectate on the course. Since access to the canyon is restricted, the only good place to see / meet people is at the aid station at the White House Ruins (the one trail you are allowed to go down without a Navajo guide or National Park Service ranger). It is also possible to take a jeep tour and possibly see runners.

Unique: all finishers get a hand beaded necklace (from one of the local families). The stone for first year runners is turquoise. They also had event stickers.

5 out of 5. If you can get in, it will be an experience that you will not forget. 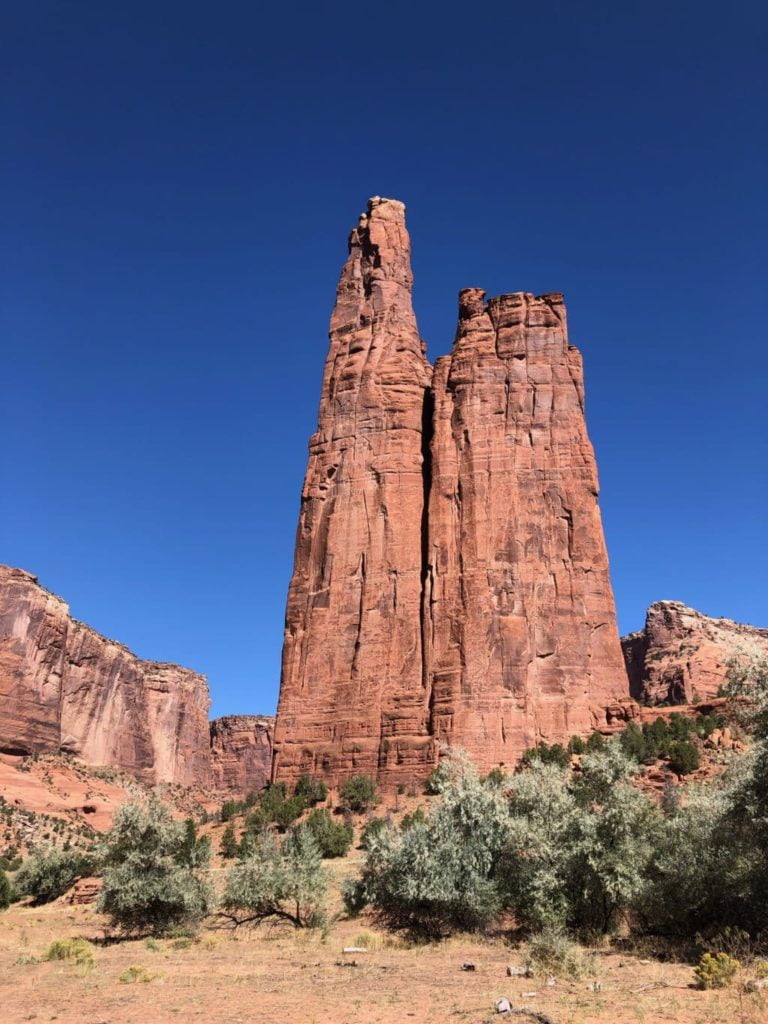