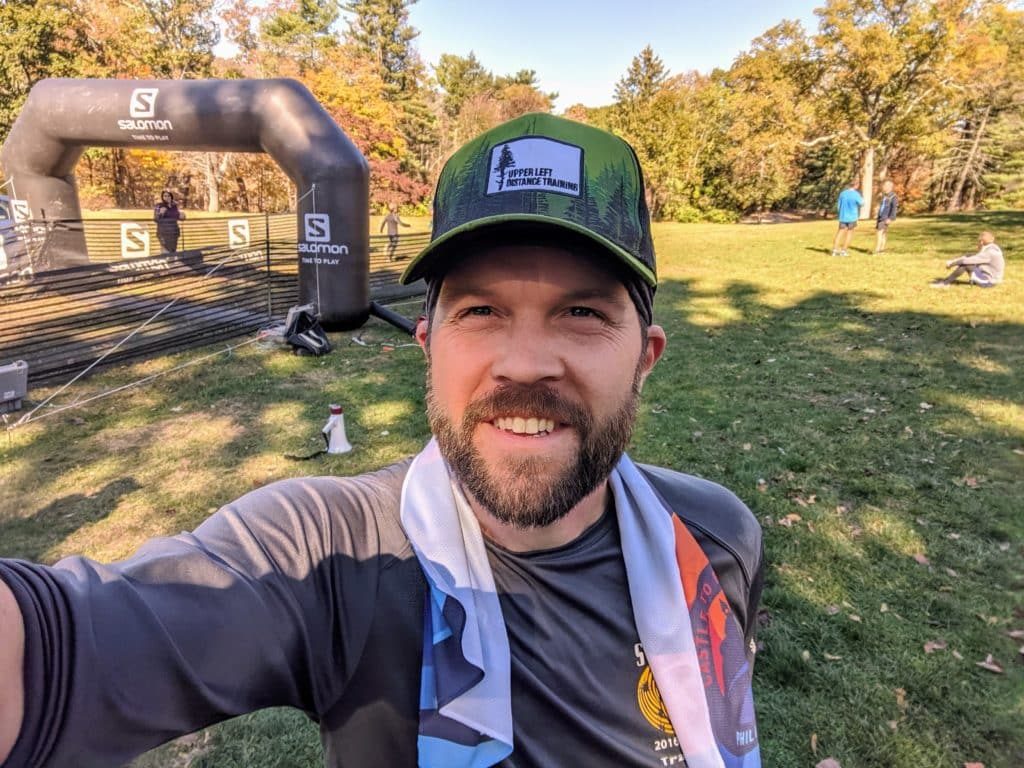 1. Indoor, heated area w/ coffee and legit bathrooms to wait/prep/warm-up prior to race
2. The number of runners was relatively small
3. The course elevation was laid out in a way that was (mostly) downhill for the final 5k

1. The first 5 miles was clogged w/ runners so getting into rhythm took longer than ideal
2. I personally found the pink trail markers hard to see at times against the multi colored leaves on the ground

The race wasn’t allowed to utilize the grounds where the castle (yeah, the one from the name of the race) is located. They said it was just this year and they hoped to use it again in the future.

The views were spectacular on the back half of the course. I found the climbs challenging enough to be fun but manageable enough that I could run up most inclines or at least hike up the climbs quickly. There were a lot of fun down hill sections, but I saved my quads til the second half before I really started bombing down some of them. Like I said above, the course is laid out so that there is a lot of down hill in the final 5k and at times I was borderline sprinting. The people were super friendly, being able to use the recreation center for a home base was awesome, and the veggie chili at the end was top notch. Fun run for sure. And instead of (another) medal at the end they gave a nice, little, tech material towel that was branded w/ the race name as a finisher prize.

Parking was easy and there was plenty of it. You can also take the metro north train to a station just a mile from the start. Check in was easy. There is plenty of room in the (heated) rec center to hang out before the race. Pace yourself on the first half (altho that may be decided for you if you are in a crowded group) and ball out on the second half. If you aren’t used to running in the Northeast, get ready for rocks and roots a plenty, many with a nice covering of leaves to make it even more interesting. But fear not, there are plenty of runnable sections as well, based on memory I’d put it at about 2/3 of the course being runnable. Also, take time to stop and look around, there are some really nice views.

I will be more conscious of where I am in the starting pack as that probably added a few mins to my time. I will also bring a to go container so I can take some chili w/ me.

It’s pretty traditional Northeast terrain (read: rocks on rocks on roots under leaves), so take that under consideration.

Yes, I was pushing to perform well on this one so I didn’t take the time to slow down and look around as much as I could have. When I did, it was pretty special.

I found it challenging but accessible. The most challenging parts would be the climbing and the terrain (when rocky). I’d rate it as moderately tough.

Dude who won finished an hour before I did, so there was plenty of competition for me 🙂

I don’t know if they even sold out. Super accessible by car or public transit from NYC, I drove up from Queens so I can’t speak to hotels but we did peak at air bnb’s a few days before and there were some available. It takes place in near peak foliage season so there were a lot of people in the area and on the roads post-race who were up to see the leaves, pick the apples and pumpkins, and do other fall things. It was less than an hour and a half drive from Queens when leaving at 6am.

There were three on the course. Really more useful for the 50k’ers or the people who were running sans water. I had my hand held and it pretty much never got less than half full. I got some flavor of Tailwind at the first one (not the Green Tea I was rocking in my bottle, so that made for a fun new flavor), went with some water to water it down at the second, and skipped the third as I was still half full and basically running at full speed. I think they were at miles ~3, ~7, and ~11.

Weather for this day was perfect amazing beautiful ideal fall day, not being hyperbolic.
Weather for last year’s race was so horrible they had to reschedule it to March.
There was a Nor’easter in the area on like Wednesday before the race.
It’s the Northeast in Fall; buy the ticket take the ride.

It was chilly to start and stayed cool enough to wear gloves the whole time. Bring gloves regardless. Check the weather for everything else. I saw more than a few people wearing hydration packs, that is probably overkill for this course.

Yes indeed, they even do a kid’s race. Great family event as long as they don’t mind the occasional blood stained racer (not me) coming across the finish line.

Meh. You had the choice between a nice Salomon hat (which would be more exciting to me if my head wasn’t on the larger end of the spectrum) or a basic cotton t-shirt. I took the t-shirt. Best part was the little towel in lieu of a finishing medal. I like the towel mostly for the novelty, but it may prove useful in some unforeseen way.