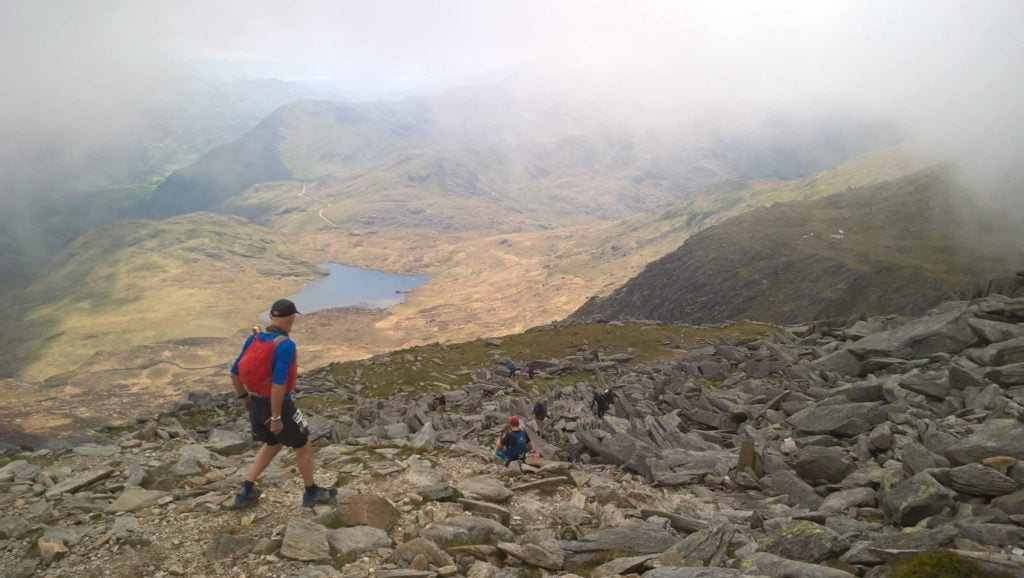 Dragon’s Back is a 5 day stage race from the north coast of Wales to the south coast (almost), down the spine of the country. 3 good things:
1. The first day’s route was awesome, including the Snowdon Horseshoe and some other rugged peaks in the areas.
2. Welsh trail runners are exceptional.
3. It’s pretty cool running from one end of a country to the other end.

1. After doing 3 200 mile races where the clock is running, and one 200 mile stage race (Dragon’s Back), I think I prefer to have the clock running and manage my sleep/rest on my own schedule. My personal rhythm during this race didn’t always mesh with the start/end of stages.
2. Except for the fast people up front, there’s not quite enough time to do everything that needs to be done. The running part is challenging, but after that ends each day, there’s a lot to do (including try to sleep) – lots of urgency even though there’s no forward progress.
3. The race comes across as weirdly rigid about rules. I don’t think they are unreasonable about rules – it all makes sense and is appropriate. But there’s just enough vagueness about the rules (e.g. no outside assistance allowed unless it’s available to everyone – can I hug my wife if I see her, or does she need to hug every runner?) and that vagueness coupled with the RD saying “I will show no leniency” created an odd vibe, for me at least.

The most surprising thing for me was finding out how empty Wales is. We spend 5 days outside, and except for the first day (lots of people hiking near Snowdon) we rarely saw other people, even other hikers. In 5 days, we only passed through 3 legitimate towns, and a handful of villages (villages = a few houses and a pub). This emptiness was most stark when the racers passed through a town and raided a business establishment. A place that might see 15-20 customers in a day, 365 days/year, would have 250-400+ smelly runners invade for a couple hours, and then go quiet again for the next two year. (Dragon’s Back happens every two years.)

Every day had some highlights:
Day 1 – traversing all the rugged mountains up north.
Day 2 – the Rhinoggs are not as well known and not quite as rugged, but reminded me of some granite basins in CA and WA.
Day 3 – this was a very rough day for me but I made it through the cutoffs and was able to continue to day 4.
Day 4 – the course passes the Elan Valley Inn, so I turned in (with many other runners) and had a beer and sandwich
Day 5 – running through the Brecon Beacons with some seriously badass Welsh geezer runners.

If you aren’t pretty fast, assume that you won’t have enough time between finishing one leg in the evening and starting a leg the following morning. Something – sleep, getting clean, taking care of blisters, checking for ticks. The medical person told us all to check for ticks every night – if there were 1600 possible tick checks (400 runners x 4 nights), I’ll bet less than 100 tick checks happened. But I digress. Anyway, instead of assuming you’ll get all the obvious stuff done each night, pick the few that matter and be ready to let go of the rest, and figure this out before the race so it doesn’t surprise you like it did me. And look for ways to save time. For example, the sleeping pad I packed requires some blowing up. After running and breathing continuously for 12-15 hours each day, it wasn’t awesome to spend 5-10 minutes blowing up a sleeping pad.

I don’t think I was getting enough salt in this race. My stomach went off during the second day, and stayed off until the middle of the fourth day when I had a really salty sandwich. I could eat a little bit of camp food (some salt) but very little of my trail food (which meant I spent a lot of days 2, 3, and 4 moving forward with out any nutrition – slowly, at fat-burning pace). I should have salted my food more, and carried saltier trail food.

There are no course markings, and only about 1/3 of the race is on a mandatory course. The rest of the time you are free to pick your route between checkpoints. The route varies from real trails, to game tracks, to trail-less brush. Locals/people who scout the course can sometimes find “shortcuts” – maybe longer on paper but faster to run. In spite of all that, it’s pretty easy to navigate the race sight-unseen. Except for people in the front, there are usually people ahead or you can see the checkpoint in the distance. I eventually learned that even if a trail veers more than 20% away from the checkpoint I’m aiming for, I should stay on it for a while longer – it’s faster than bushwhacking and will probably turn back towards the checkpoint. All that said, you need to be able to read a map and navigate to get through this.

Wales is gorgeous. It’s more dramatic at the north end (Snowdon, Rhinoggs) and south (Brecon Beacons) but even the middle sections (Cadair Idris, Elan Valley) have some views.

About 200 miles, 50,000 feet of climbing, off-trail at times, 2-handed scrambles around Snowdon, too little time to do everything that needs to get done.

Dragon’s Back is really well organized. They have to move camp for 400+ runners every night for 4 straight days. That’s hard even if you are a well-oiled machine, and they did it flawlessly. Everything they did was done well.

Everyone who enters is strong relative to most of humanity. In years past, the people up front were locally competitive but not names that would be recognized elsewhere. This year a couple talented people came from North America and ended up winning, but not by a huge amount. An elite who entered could expect to win, as long as they don’t get lost, can manage their energy over 5 days, don’t have problems, etc.. The locals know what to expect.

Registration happens a year before the race – Dragon’s Back alternates every other year with Cape Wrath (in Scotland). When one finishes, registration for the other opens up. There were ton of logistics coming from Seattle to do this. E.g., I did this as part of a 3 week visit to Scotland and Wales – I had one small wheelie for the other 2 weeks, and one large suitcase for Dragon’s Back. You have to plan in great detail to make this work.

No aid stations! Between the start and finish of each day, you carry/source your own food and water. Since there are essentially no stores along the way, that means carrying your own food and getting water from streams or the occasionally tap. The few times we passed a store, it was a chance for a break from trail food. Camp had ok breakfast and dinner food – vegetarian, which was ok for me but not for some.

We had pretty good weather but it can get challenging – wind, rain, etc.. They require all runners to carry enough clothing to handle bad conditions.

No. Partly because a lot of it is remote – not remote like Alaska or the Congo, but because we we spent a lot of time up on ridges/mountains. And partly because of my uncertainty around the “no outside assistance” rule, as mentioned above.

If races this hard are appealing to you, do it. It’s not as well-known as Western States, Hardrock, etc., but Dragon’s Back is up there in terms of quality. Here’s a detailed race report: https://pointlenana.wordpress.com/2020/02/03/dragons-back-may-20-24-2019/

Mark Cliggett is a coach with Team RunRun. To learn more about him or to work with Coach Mark, check out his coaching page.