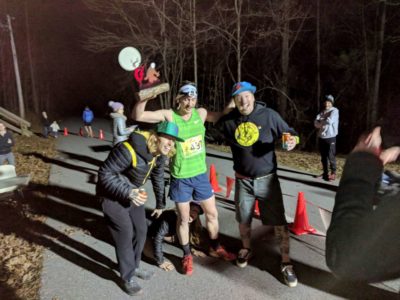 It felt like more of a party than a race! It was at night. It was well-organized.

Overall the course was marked very well but there were a couple places where I had to stop running and hunt around a bit to pick the course back up.

That it’s mostly a party. There was a DJ playing music while dressed as a yeti at the finish line and a Michael Jackson impersonator who performed a couple songs for each wave of runners to pump them up before the start of each race. 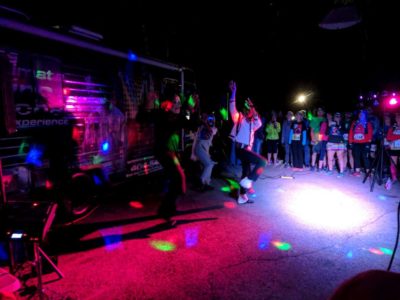 I was happy with my speed given my short time in running, and the fact that it was at night with a lot of tree roots and rocks. There were some awesome views of the full moon above the city skyline which you could see at one point in the race. The people were all really friendly.

Make sure you have a bright headlamp and bring a friend to run with you for fun. Also bring a designated driver since the finish line party is so awesome.

There was one long steep hill at about the one mile mark and I need to do more hill work. It gassed me and I wasn’t as fast on the rest of the course as I wanted to be after getting to the top of that hill.

It is but of course, it is at night so you can’t see much. You are running along the side of a lake for the last mile or so and can see the brightly lit club-house where the finish line is across the lake which was cool to see. 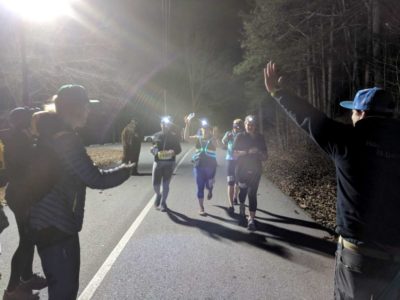 For me it was because I have not spent much time training on hills. I think total elevation gain was 811 feet. That’s laughable for ultra runners used to climbing 30k feet but for a new runner who doesn’t run a lot of hills, it’s a fair amount. I tripped a number of times on roots and rocks but never fell – plenty of people did fall though but no serious injuries.
Organized and well run – Did it feel like a well-oiled machine or were they flying by the seat of their pants?
It was very well-run and there were more volunteers there than positions to volunteer in!

That was a great part of this race. There were some really fast runners there, and there were a lot of low-key runners who used this race as their first trail-running experience. In the 10-mile race, the fastest finisher finished in 1:13 and the slowest finished in a little over three hours. So you have a really good spread.

Very convenient from Atlanta and the Atlanta Airport. No secret handshake but it sells out very quickly each year. I would advise taking a taxi, uber, or having a designated driver so you can partake in the party at the end.

Only the 10-mile run had an aid station and it was around mile 6 or 7 I believe.

March is very unpredictable in GA. In past years, it has snowed, rained, and been warm. This year, we were treated to 48 degrees and clear skies. Perfect weather for running.

Not on the course, but at the start/finish absolutely. Lots of friendly people, dogs, drinks and snacks.

Nice t-shirt is provided with entry, and they usually have a small Yeti swag table too. Trophies looked awesome too.

5 stars and I’d recommend to anyone who loves a fun party-style trail run, and for people who also want an introduction intro trail running. 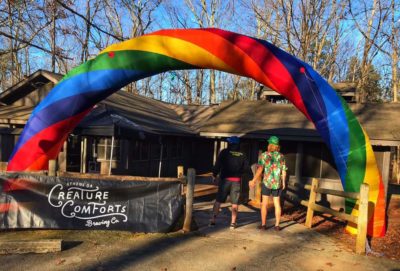