“Everything in the desert wants to hurt you. I saw some of the nastiest falls – from trips and falls to people kicking cactus between their ankles. Plain and simple, the desert is not a friendly place. The heat and more so, the sun. I personally suck at hot races, but managed well here. It is so freaking dry that the water evaporates off of you SO FAST. At one point I told my crew I could hear the ice melting! I wore sun sleeves and calve sleeves and am glad I did. It saved my skin from getting burnt. The big key is if you wear sleeves – is to keep them wet, and that meant carrying more water. Which was extra weight.” 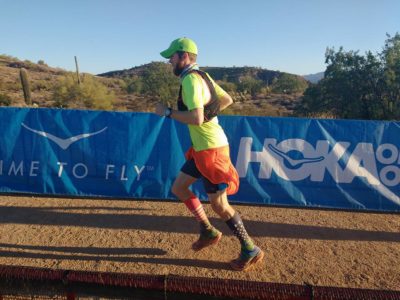 3 Bests of the Javelina Jundred

As a first time participant of the Javelina Jundred, my favorite things about it were:

What didn’t work for you about the Javelina Jundred?

Weirdest thing about the Javelina Jundred?

As a Javelina Jundred first timer, there was a lot to take in. There are some seriously impressive older folks that run this race, and some of them are not so shy with their bodies. I might have seen more skin than I would have particularly liked. Heck there were younger folks too that had no problems wearing nothing but a thong as their running outfit, and I can’t imagine how that person did even 20 miles wearing that.

What were your highlights of the race?

Since this was my first time running a 100 mile race, and I was a Javelina Jundred first-timer, I liked a lot:

Lessons from your first Javelina Jundred

I wish I would have mentally pushed harder during the 4th and 5th loops. I think I walked a bit more than I would have liked, but at the time it seemed like my best option, and it is always easy to look back and think I could have done better. At the time, I remember thinking “when it sucks to run and it sucks to walk – you might as well run” and I would start to run for a few hundred steps and fall apart again. My feet really hurt by the end and that was my biggest issue by far.

Most Important Course specific knowledge about the Javelina Jundred?

Where People got Hurt:

If you have Verizon, cell coverage is actually pretty good. My pacers could call my parents and let them know I was 20 minutes out from the finish and they could leave the campsites they were at and be there, without really having to guess too much. It was great. My pacer Dan had a garmin watch with an app that was something like a live track feature. It was really convenient since everyone on my crew knew exactly where I was at all times.

Is the Javelina Jundred a pretty course?

Yes this is a pretty course in a different way than I am used to. I am used to the typical northwest trails that are beautiful from the rocks, trees and alpine lakes. This race has none of that! However, what it does have, is different things that make it beautiful in its own way. You are in a sauce pan of mountains. Essentially there are mountains 360 degrees around you. There are huge cactus everywhere, and boy is there plenty of things that want to poke you. Seeing the sunrise twice and the sunset once was absolutely amazing and it added to the beauty of the course. It is also very wild. I saw at least 3 or 4 coyotes through the middle of the night which was really cool (I luckily didn’t come across any snakes or scorpions). Because it was so different from what I have grown accustomed to, I found the course to be quite pretty.

Is the Javelina Jundred difficult for a first time 100 mile event?

This is not an easy course for three reasons (they say this is a great beginner 100 miler, and I tend to agree mostly due to the atmosphere this race provides).

Is the Javelina Jundred organized and well run?

Is the Javelina Jundred a competitive race?

How hard is it to plan for your first time at the Javelina Jundred?

This is what I discussed earlier – it was HOT, and dry.

What gear do you recommend for a Javelina Jundred first time runner?

A vest is good here. A sock change is recommended every loop unless your feet are bullet proof. If you start getting blisters – take care of that stuff early since it will do nothing but get worse as you go along.

Is this a good course for spectators?

This is not a super spectator friendly course, but I am not really sure what 100 miler is… Your family and friends get to see you at the HQ and that is it. You start and end at the HQ, and you go through it at least 1 time each loop. This race makes sense if your crew has a tendency to get lost, or you want to make it easy on them.

Everyone that finished the 100 mi got a nice brass buckle. If you go sub 24 hours, you get a bigger silver one.

How would you score your first time at the Javelina Jundred?

I give this race an 8.5 out of 10.  It was right up my alley in terms of difficulty (from an overall difficulty due to 100 miles) and it was so different than what I had expected that I still had a really great time. The party atmosphere and seeing people dressed up in crazy costumes made the loops go by a little faster. Some even made me wonder “how the hell are they going to do 100 miles in that?” I really am not a huge fan of heat, and this race was no exception, but it was manageable with a good plan, and just staying cool. Seeing the race happen live was pretty cool and it was inspiring to see the top guys going so fast.

Check out more runner reviews of the Javelina Jundred (going back to 2017):