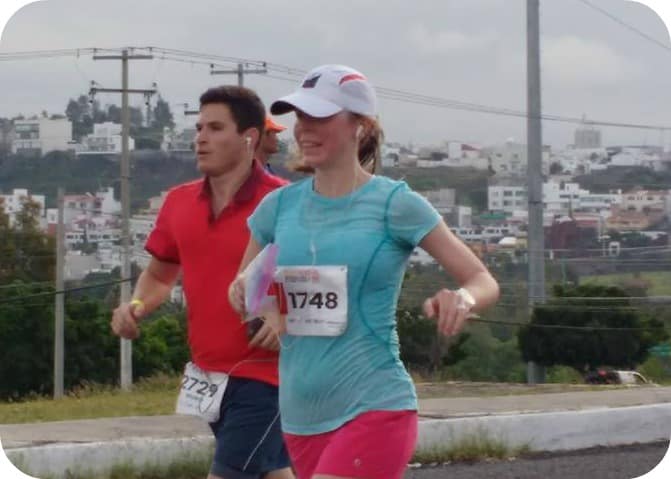 -The experience of running in another country, in another racing culture, with lots of other people. Everyone felt very happy to be there and supportive of one another. And I love that everyone wears their race shirt the day of the race (I couldn’t bring myself to do it; not on a half marathon).

-The race was very well organized from the packet pickup to the pre-race set up, to course markings, and to the finish line chute

-So many out and backs, and some of them very short. I think we did at least 5 different out and backs with a 180 degree turn. Not that I’m flying on the race course, but they definitely slowed me down to have to turn on a dime so many times

-It would have been nice to see an elevation profile on the race website. I had no idea what to expect and it was actually fairly hilly (900 feet gained; nothing for trail miles but a challenge for me at 6000+ feet)

-Water was in small plastic bags, so you had to tear off the corner with your teeth first and then squeeze it out just right. I’ve had this before at a race in Guatemala, so it wasn’t that weird, but it still threw me for a loop. I loved looking around at all the other runners tearing off the corners and squeezing the bags, and there were streams of water flying everywhere.

I was happy with my tactics of slowing it down on the hills and picking it up on the flat and downhills. This wasn’t a hilly course by any means, but it was hillier than I’m used to and the hills were harder at elevation, so when we first started I was a little worried with how spent I felt from the beginning. But I backed it off and just tried to enjoy the experience and my pace actually didn’t slow down. The last 5k was nearly completely downhill, so it felt so good to let go and let momentum help pull me towards the finish. I had hoped to be around two hours and was really happy to run well under that.

-Also, maybe it’s because I’ve been out of the racing scene for a while, but I’ve found in the last two races here in Mexico that people aren’t very cautious about cutting right in front of you to pass. I had a few times where people cut in really quickly in front of me, even later in the race where there was plenty of space elsewhere, and I almost fell. I don’t think it’s a Mexico thing; I think I’m a little out of practice with racing, but something I noticed in this race and the last.

Not really, but it’s not ugly either. I was happy when we were done with all the out and backs in the first half of the race and then just had a long stretch on a wide open road for the final out and back. We had views of the mountains surrounding the city, so you could say it was pretty. For a road race it wasn’t that bad.

Mildly difficult because of the elevation and some of the hills. On the way out we were on a long, gradual hill that we could see going for a few kilometers, so that was hard, but it was fantastic coming back downhill for the final 5k.

It felt very well organized, from packet pickup (it was outside at a Park that we ran at daily in Queretaro), to the race morning, to race markings, to aid, to the finish line festivities.

I think so. There was prize money and I saw lots of fast people on their way back while I was still running out.

Nothing special. I signed up the day before the race at the expo. I think the online registration closed a few days before the race and there was a cap of 6,000 runners total for the half, the 10k and 5k, but they didn’t reach it.

There was water every few kilometers and the for the second half of the race they had an electrolyte drink. I ate two gu and took water fairly often, even if just to have a little water in my mouth or dousing my back.

It was 60 degrees and breezy at the start and warmed up quickly in the sun, especially being on the road and exposed. It warmed up to 80s that day but likely only in the 70s by the time I was done, since the race started at 7am.

The whole time I was running, I was wishing I’d had my Ultimate Direction Jurek belt, so I could put my gu and my phone in it. I carried my phone because I had to take Uber to the race and I wanted to be able to contact Matt, but it really sucked running with my phone in my hand. I tucked it into my sports bra a few times, but ended up bruising my boob! A little waist belt would have been perfect for gu, my phone, and a few pesos.

Actually, yes. With all the out and backs and looping around early on in the course, spectators could have gone to several locations to see runners.

Awards – There was money for the top 3 in men and women.

4.5 out of 5. The large amount of out and backs and looping around were the only fault of the race.