On October 9th, Mike set out to run an out and back on Section J of the PCT in Washington State. He shares some of the highlights here (well, lowlights depending on your perspective!) of the attempt. Strava route: https://www.strava.com/activities/4200773905

After running 64 miles for 22 hours I came out of a sleepwalk in the middle of the night to find myself going hypothermic. It had been pouring rain and then cold weather set in. I was so close to the turnaround point of my 148 mile out-and-back attempt on the Section J of the Pacific Crest Trail (PCT) in Washington. As my body temperature plummeted, I realized I was going the wrong way back up the mountain where I had just come from. I had to keep moving to stay warm so I continued going back.

I was carrying 2 emergency blankets and an emergency bivvy but I couldn’t get any sleep with the blanket in the cold rain. During a previous multi-day run, my body temperature had dropped after waking from a nap which was in warmer and dry conditions. Not wanting to risk that again in the current conditions, I resorted to micronaps of several seconds of sleeping to keep functioning. As I climbed to the higher elevations, the rain turned to snow.

The ridge was fully exposed with heavy wind. I had to rely on my headlamp’s light that barely penetrated the flurries and a GPS app on my phone to lead the way. When the trail wasn’t being buried in snow at the higher elevations, it was becoming waterlogged at the lower levels. Streams turned to rivers which had to be forded in the middle of night while sleep deprived. After going back to the higher elevations with now a foot of snow on the ground and having been awake for 46 hours, I lost my phone.

My only navigation was gone. I usually carry a GPS and tracking device that can 2-way text and send SOS messages to local authorities. During previous multi-day runs earlier in the summer, it had weighed me down mentally and physically so I left it at home. I retraced my steps in the snow and felt my heart race the many moments I thought I found the phone. After fruitlessly searching, I had to move on. A month later someone posted on a local trailrunning Facebook group they had found a phone in the snow on this trail. These pictures from the journey are not lost thanks to him. 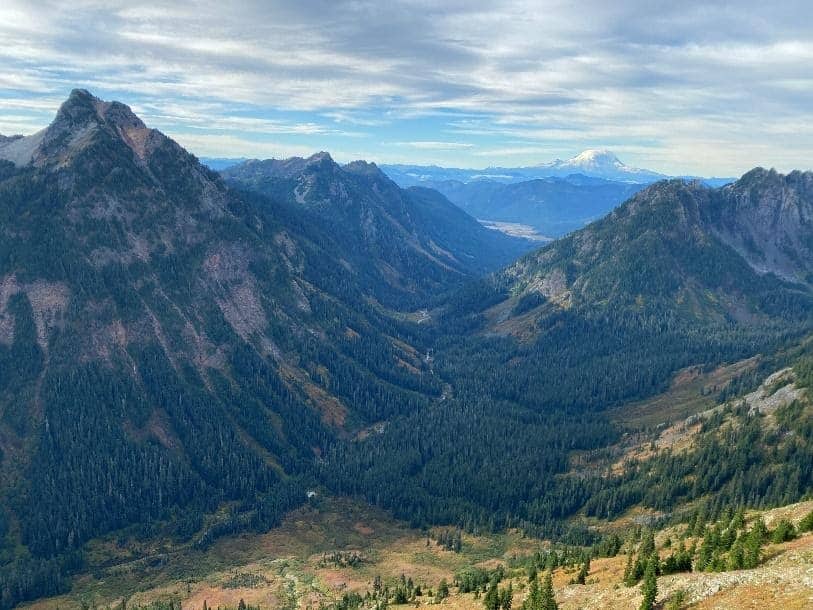 It was now light out which helped better navigate the trail. I came to a section and noticed an old trail sign carved from stone partly hidden in the snow. I dug in the snow around it and found more stones with faint letters and thought I had found relics of this storied trail. Continuing on, I realized all the rocks had inscriptions on them. The hallucinations from the lack of sleep had begun.

My sense of direction and judgement quickly deteriorated. Having lost the trail under the snow, I decided to cut across the valley going cross-country down the mountain to Joe Lake. Desperation grew as I failed to find a way out of the valley and approached the 60-hour estimated completion I had given a friend. Exhausted and defeated I tied one of the emergency blankets to a trekking pole and waved it in the air while blowing an emergency whistle. Then I noticed on the ridge a person watching with a dog. I waved the pole harder and higher and blew the whistle louder expecting any second to see them come to my rescue. But the shadowy figure and dog were another hallucination.

I slept in the emergency bivvy under tree cover that provided some relief from the rain. After several hours I woke to my friend sleeping close by who I had given my itinerary to. The hallucination eventually faded away during the night but it helped me get 10 hours of sleep. Energized, I found Gold Creek trail that runs parallel in the valley to the PCT. A raging river had to be crossed with water up to my waist where every step was consequential. After reaching the end of the trail hours later, I ran to the nearest cabin. I needed human contact again having not seen anyone since the morning 3 days ago.

As the couple gave directions, I cradled myself in their words with immense gratitude. After getting to a main road, someone stopped to drive me to my car a few miles away. I had returned after 80 hours and 140 miles. A King County sheriff was there waiting and I would learn my friend with the itinerary had reported me missing that morning. The sheriff had coordinated Search and Rescue teams that went looking for me. He was about to publicly broadcast I was missing on the trail. I shed the first of many tears knowing my selfishness impacted the ones I love and the Search and Rescue volunteers. They deserve better. And so, I will be better.