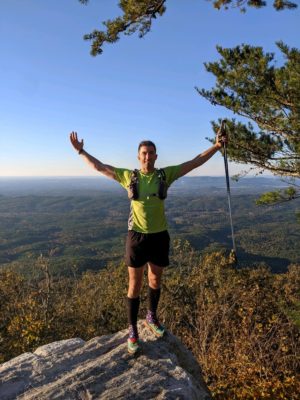 Right out from the starting gate the first ~ten miles of the race is called the “Kanga Line” This is because the single track section (90% of the race is single track) doesn’t allow for passing. Everyone is more or less walking/jogging/stopping for ten miles in a traffic line waiting for the course to open up.

The race is over the time change every year. Your watch and smart phone will probably change times WITHOUT your knowledge. Ask aid stations for the “Race Time” as compared to “Current Time”. Don’t get caught counting on getting an extra hour of race time for free like some people do…

You’ll pass a few small waterfalls, and cross dozens of streams. There were a couple of pretty viewpoints but mostly your going to be in the trees here. The best part though, was the shade from all the direct sunlight.

This was my first so I’m probably not the best to ask but in short, No, this wasn’t a terribly difficult course. Coming from Utah and doing most of my training on some serious mountains, I found myself in the Alabama hills, asking “Where are the real mountains?” With that said there is a TON of up and down on this course. The whole time you’ll either be going up or down for a total of 30k ft of elevation change, but not too much of it was really steep or challenging.

This is a well run machine. For the most part they really know what they are doing and have many runners come back year after year to participate.

Show up and throw it down. Nothing too difficult here. It is the last qualifying race of the season though so expect it to sell out. I was on the waitlist and made so don’t fret if you’re not early to signup.

Hope you like tailwind, because its all they’ve got.

Bring some hand warmers for the starting line as you’ll be cold and there isn’t anything to keep you warm while you wait.

This was a great first time 100. I’d recommend it.

Looking for an ultra running coach? Check out our coaches to find the best fit for you and your race!