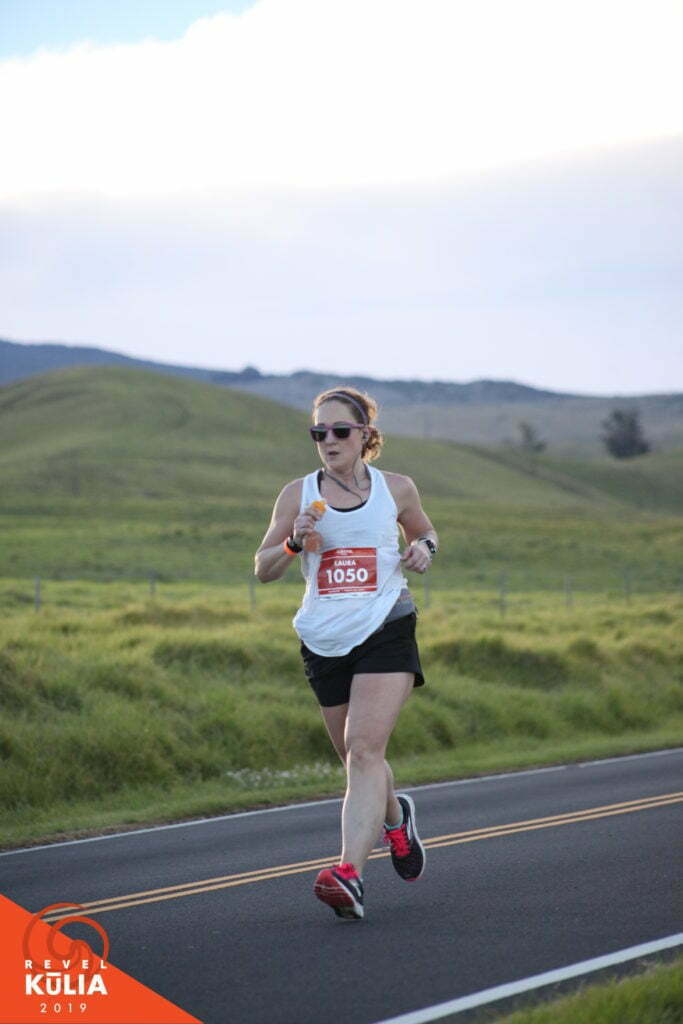 Revel is a very informative, organized and helpful organization. There were multiple communication emails that went out prior to the race explaining how things would look like for packet pickup, and race day. As a nervous runner, the more information you give me to visualize the day, the better! They had live online sessions where the course was described with tips on how to run it. Their aid stations were plentiful and well stocked with supplies. And I really liked the touch of having the Hawaiian blessing pre-race. It seemed they really wanted to respect the Hawaiian culture and make sure that the race left a very small footprint on the course.

The wind! I should have thought about the Hawaiian trade winds, but didn’t. I would have discussed pacing strategies during a headwind with my coach had I been warned. Revel also required that we ride a bus to the starting line. The bus picked us up at 4:30am, exactly two hours prior to the race start. So being a person that is meticulous about my routine in the two hours before a long run or race, I found this to throw my whole timeline off. I was too nervous to eat on the bus with an hour ride to get to the start, and once we got there, it was too close to start time to eat my normal breakfast and drink my coffee. The result, I ate a quarter of my normal pre-race meal and got about three gulps into my coffee.

This was literally the smallest finish area I have ever experienced. The race ended in a field of lava rocks where there was nowhere to sit without squatting down to sit on a pile of rocks. I’m sure they did this to cater to their downhill course, but I think they need to recreate the course a bit to work something else out.

I PR’d by 20 minutes and hit 4:00:00 on the dot! I would have loved to have been under 4, but to hit it exactly was a pretty awesome next best thing. I really pushed that last mile when I saw the time, so I was thankful to still have enough in the tank to get that time.

Don’t start out too fast! The steepest downhill is during the first 9 miles, and then it transitions to more of a rolling hill situation, so if you fly through that downhill you will kill your quads for the remaining 17 miles.

Pay attention to pace if faced with a head or side wind. I pushed it too hard early in the race during a few particularly windy miles and I feel that affected my legs on the rest of the race. I also learned after the race that it helps to stay with a pack of people during windy conditions. I don’t really like to talk when I run, so I was running by myself the majority of the race.

Yes and no. The sunrise was amazing, and for a good portion, I had the blue ocean on the horizon to stare at. I even saw a whale at one point! But there was also a good chunk of the race that had a view of lava rocks and/or grass. It’s not in the tropical portion of Hawaii, so if you’re picturing running through palm trees and jungles, you will be disappointed.

The course was tougher than I had imagined. Revel really sells their races as downhill, and yes, they went into detail about the course with us before the race. But the details they gave us discussed the overall grade of each mile and left out the part about the uphill portion of some of the miles. So I trained entirely for a downhill run when I should have been focused more on training to run a steep downhill for the first 9 miles, and then transitioning to rolling hills with a smaller downhill decline.

This race was incredibly well run and organized. Especially for it being their first race at that location.

The aid stations were well staffed and stocked. They offered water, Powerade, Honey Stinger gels and DoTERRA Deep Blue rub, which was fantastic after about mile 17.

I was worried about the humidity and heat after training all winter in Spokane. I spent hours strategizing my plan to stay hydrated. Instead, we had temps in the low 70’s, cloud cover and a cool wind. I laughed when I saw some of the volunteers in sweatshirts.

There were a few spectators along the course but they were few and far between. Most of the time we were running on roads that were open to traffic.

Revel did a great job with the swag. The shirt and medal were both great, everyone got Goodr sunglasses, and my kids loved the temporary tattoos they had available at the race expo.

Overall I would give Revel Kulia 4 stars. It was a great destination race, it just needs a better finish line! 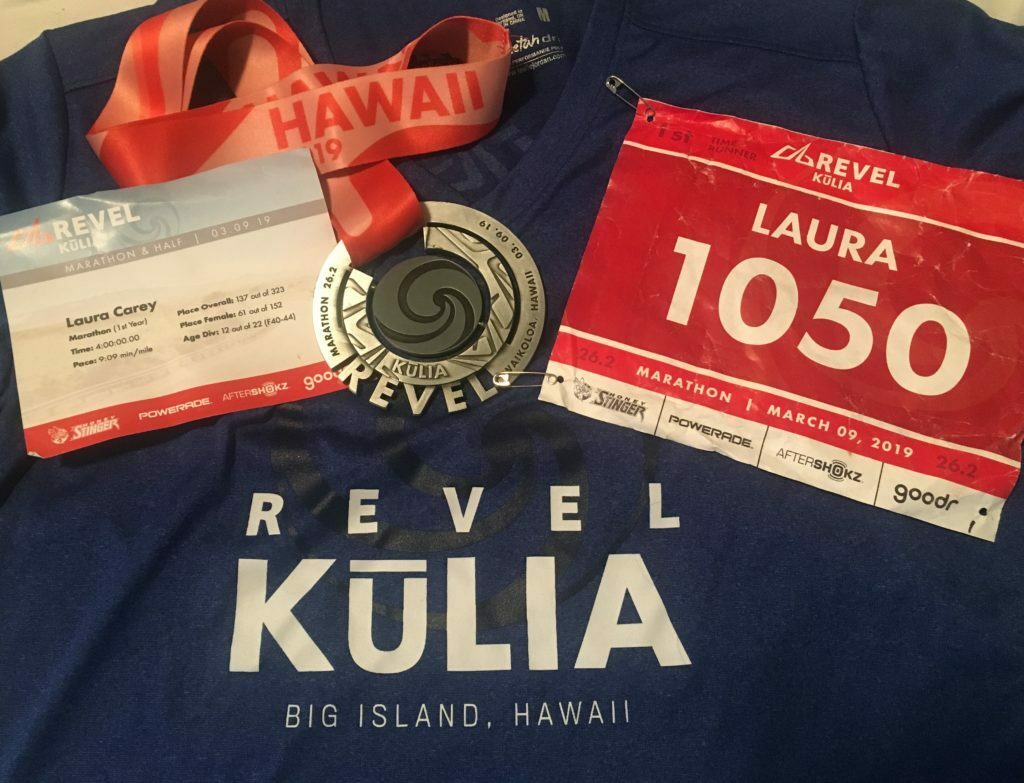