Results: DNF. That’s Did Not Finish!

Aid station food. No, really. Maybe I’m spoiled, considering the races I’ve taken on, but I could not find enough fat and protein. Course aid consisted of Transition Areas and Check Points, and the Cps had candy, light snacks and sport drink/water, with some offering Fireball (you know what that is!!), which must have been to take the edge off as I looked for real food. The TAs had everything you could want, and later in the race offered great choices, but there are only 3 TAs on the course, with two round trips on 3-4 and 5-6. And the chips were all mostly vinegar, pickle and, uh, ketchup, which was new and made it difficult to find fat. Canadian stomachs must be tougher!

The understated attitude of the entrants: “maybe I’ll finish, maybe I won’t”. This was odd until I recognized how difficult Sinister7 is. The difficulty is mentioned on the website with a warning, and if I had studied the giant race map hanging at the pre-race, I would have noticed sections titled “endless mud”, “the pit of despair”, and “FU2”, which was on leg 6; I had to pull the plug before I started 6, so I can’t say what that was, but probably a slippery climb I heard was on all fours unless you used poles. Also, the lure: there’s something about Sinister. My wife Rebekah and I both dropped, she at mile 55 and me at mile 68, but the whole thing is weirdly alluring, and we both want another crack at it next year; we will go back! Rebekah talked to the president of the Toronto running club, who has never finished but keeps coming back, she spoke of a guy who had run 108 ultras, was shell-shocked and never spoke a word after dropping, and was described as just “having a rough day”. The guy I got a ride back to race start with is now 2-for-5 attempts. I guess these people just love a good challenge, and they all go back for more, and we will too. That kind of obsessiveness is just weird.

This was a race of cascading consequence, and presented difficult choices. I actually executed in, I feel, a mediocre way, and relied on my experience to carry me through when things began to unfold in unexpected ways. I really, really enjoyed the course as far a beauty and the wild nature of the challenge. I always push on, no matter the conditions or difficulty, unless I become injured, and this race was no exception. The people were all amazing, and interesting to talk to, and I learned a lot about “people”, something I sometimes take for granted. One bright spot: I killed a bout of nausea pretty well and quickly, which is always a challenge, and protected my feet really well from all of the water; that is an ongoing learning process.

Do your homework. Read the race reports. I neglected to look at the results to prepare myself for a really difficult race, and instead relied on my experience, and was shown the door. I am good natured, and love a challenge, and am not afraid to look at my mistakes, so I am cool with this. Use all available resources: I didn’t glance at the giant race map hung at the pre-race, which was there for a REASON. I DID talk to persons who have run the course, but they all cautioned against heat, which never materialized, making our heat training in Death Valley nearly worthless, but at least we did try to simulate conditions.

Use poles earlier; we had saved the poles for leg 6, the biggest climb. Tighten my shoes as soon as I feel them loosen, instead of allowing the instability to contribute to tendonitis when conditions break down and I’m fighting for traction, for miles on end; tendonitis ended my race. Be patient up front, there is plenty of time to open it up and run free; you’d think I would learn this one by now. Remember the spare headlamp! D’oh!…

Be ready for anything. In the summer, British Columbia, to the west, usually experiences fires, and smoke can be a problem – like 2017. But this year, it rained off and on for weeks until race day, and most of the course, which is usually hard clay, became an insane mess. Definitely be prepared for water – there is a section called endless mud, and we enjoyed two thunderstorms, and Rebekah told me she was pelted by rain AND hail. There can be bears, although there has only been one negative encounter in 12 races (no idea what that meant when the RD shared that at the pre-race!!), and there are cows on the course. There are a lot of fire roads and off-road vehicle roads.

Absolutely beautiful course. Alberta license plates have a phrase “land of wild roses” that I disregarded until I saw them for acres and acres. Beautiful vistas, high and low alpine forests that this year were basically temperate rain forests. Green, green, green – I was loving it.

I think I made this clear, but this is probably the toughest course I have run – and I have run WS, and Pine to Palm, which has a bit more elevation gain. Tahoe 200 has more climbing and distance, but is basically dry. Add that there is a tight 30 hour cut off to finish, and if you like a challenge, this race is it for you!

Only race I have run that is more organized is Western Stares. Sinister looks at the details, and state on the website http://www.sinister7.com/ that they are always improving. It definitely shows.

I can’t answer how strong the field is. I mentioned previously the people who dropped at mile 55 with my wife Rebekah, who has finished Tahoe 200, and another guy who dropped had previously finished Moab 240 and UTMB 4 times, so there were some tough cookies who dropped out there. It would be interesting to see, a big, well known US race entrant list tackle this so I could answer what a strong field at Sinister should look like.

There are a little less than 400 soloists allowed, and there are hundreds more relayists, so the race does fill up. Hotels are tricky – we stayed 30 minutes away, as there are not a lot of accommodations in the Crowsnest area. Fly into Calgary and drive south, or into Montana, probably more expensive, and drive north. Be ready for an adventure.

I went into this above, and know now I really have to pack more Epic bars and other sources of fatty foods, at least to have between TAs. Be ready for ketchup chips, ugh! They did have pickle juice – and Fireball if you have a really adventurous spirit!

Again – totally unpredictable. We trained for heat in Death Valley, and did runs along the North Rim of the Grand Canyon at 8000 feet, and were rewarded with water, mud, thunderstorms, streams and water crossings. Just be really determined and COMMIT.

I did use my rain gear once, and could have done without it, but avoided hypothermia at all costs; Rebekah dropped from hypothermia. Many, many socks. My feet are normally my weak link, and I changed socks 5 times. I could have changed 8, if I had finished. Poles. You will need them up front, with 20,997 feet of climbing.

All of the TAs were packed, with the first big one at TA2-3 crowded with hundreds of spectators; it was amazingly inspirational and appreciated!

A cool shirt, gifts that included Canadian anti-chafe and icy-hot style creams, package of local jerky, A really cool sticker I can’t put on my car until I finish next year : ( , a lightly insulated lunch container that everything came in. They gave away pairs of Altras at the pre-race dinner, along with water bottles and other goodies to lightning quick people who ran up when they fit the bill with the correct answer to questions from the RD.

I don’t know why – I had my butt handed to me when I developed insane tendonitis, that brings a big race in September into question now, but I have to say 4 to 5 stars. But what can I say: I like a good challenge! 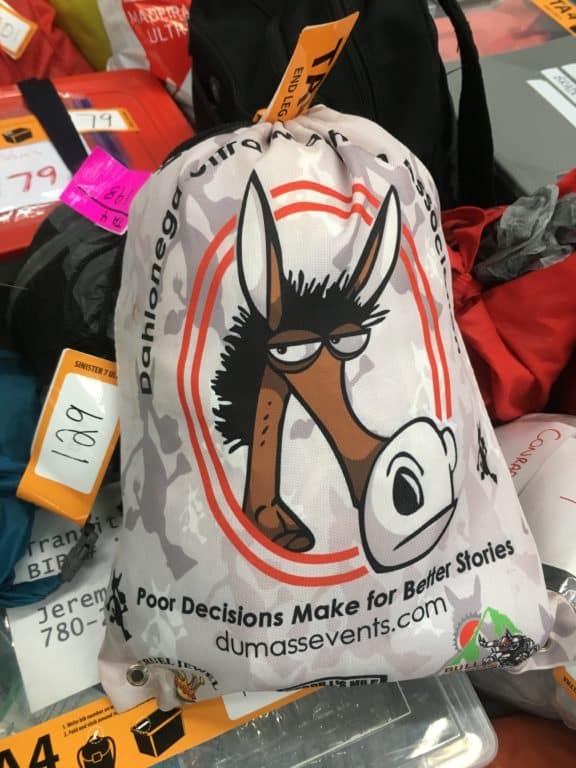