What to Eat Before a Run

What you eat before a run can be the difference between a botched run and one that you’re excited to upload to Strava. The former takes a long Strava title to explain what went wrong, and the latter leaves that typing time for geeking out on the numbers. There’s nothing worse than going out for a 6 mile run on an empty stomach and bonking 2 miles in, riding the struggle bus home for the last 4 miles. On the other hand, downing a Chipotle sleeping pill, cleverly disguised as a burrito, also doesn’t bode well for many runs.

So what do people eat before a run? We asked coaches and team members what they prefer to eat before a run, how much time in between eating and running, and what changes about the routine before a big workout or a race.

The 3 Most Common Foods

Our personal favorite that seems to pack the perfect punch? Meghan Lelonek tends to run in the early morning and her go-to meal is 1-2 Dates dipped in PB and shot of espresso. #rocketfuel

Short on time or want it even simpler? Heather Park loves tailwind + water for her workouts and Jami Barrett always keeps a gel handy in case she needs it before a run.

Time Between Eating and Running

It only takes one time to learn that going for a run 4 hours after a light breakfast is a good recipe for bonking, so most runners have this dialed in fairly well. The consensus for the team?

20-30 minutes between eating and running with a simple pre-run meal
30-60 minutes if it’s a workout or a race, or if you ate a larger meal, increase that to 90 minutes

Eating before a Long Run or a Workout

This is where people tend to diverge a bit, as the stakes are much higher for eating the wrong food for your body before a big effort. It’s easier to shuffle through a 3 mile run on a full stomach vs. a 20 minute tempo run or a 20 miler, so most people are dialed in on what works for them. It takes trial and error to find out what works for you so that come race day, long run day, or big effort days, you’re fueled up, psyched up, and ready to go.

Heather Park has a unique take on a classic Congee, except with oatmeal, combining oatmeal porridge with kombu powder for flavor + umami, and she adds an egg in last for protein, along with a splash of soy sauce. If a sweet breakfast isn’t your thing, check out her recipe below and tweak as needed to make the perfect pre-long run meal.

When Coach Stephen Littlewood is heading out for an ultra, he goes for the Chipotle style approach with bacon, egg, cheese, jalapeño, and guacamole burrito, leaving 60-90 minutes between eating and running. His recipe? Just be sure to be heavy on the guac.

When it comes to deciding what to eat before a run, what do most runners do? They keep it simple, keep it small, and test and re-test before race day. 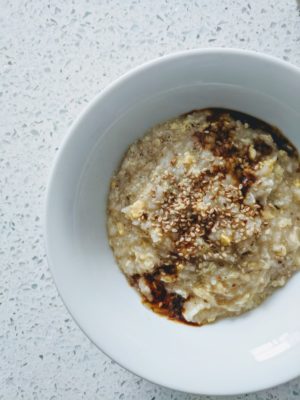 Combine above into a saucepan — bring to boil, then let it simmer. Stir occasionally. Oatmeal should start getting a porridge consistency — “gooey”. Add egg in and turn off heat, stir so the heat of the oatmeal gently cooks it.

A special thanks to all the runners and coaches on the team who helped contribute to this article. Onward!