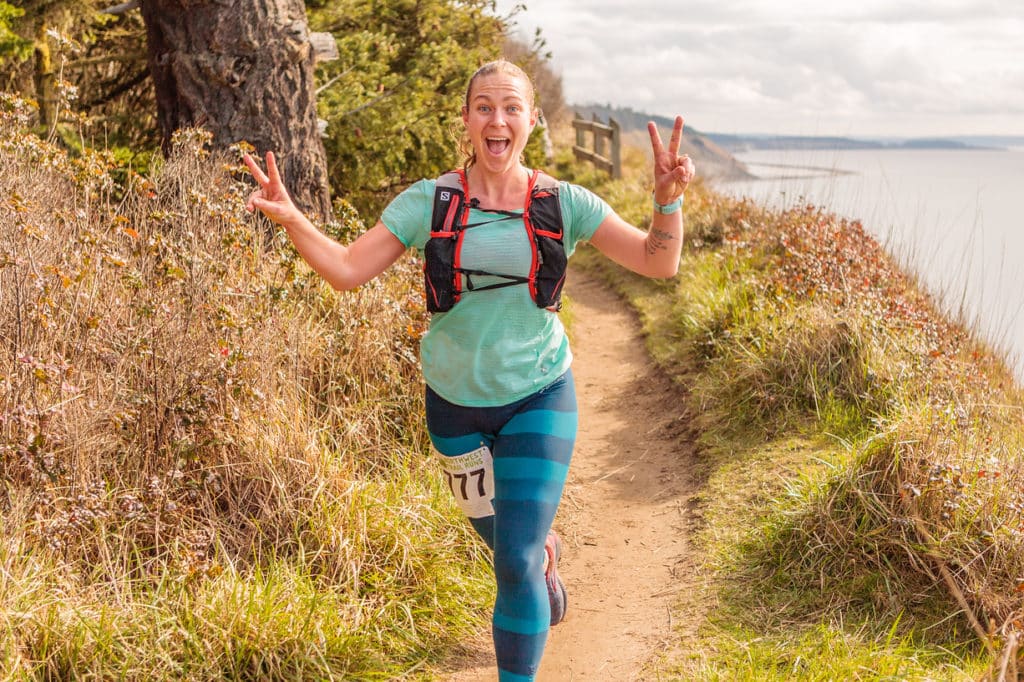 Nothing, really. I was pretty happy with everything.

At about mile 10.5 the course brings you almost back to the start line, which is confusing because I knew we had a few more miles to go. But, the course does a loop and doubles back on the same trail for about 100 meters before turning off and doing a larger loop through the woods back to the finish. It was confusing to see runners going the other direction the trail, then turn around so close to the finish. But, if I had looked at the course map better, I probably would have known that was coming.

I finished! I was happy with the way I paced myself and that my legs, though tired, got me through to the end. I ran the climbs for the first 5ish miles, then started hiking them, which was a good choice. It meant I was able to run all of the flats and downs, which was the goal. This was my first trail race and the idea was to start learning how to run them. I definitely accomplished that, and learned lessons that I can apply to my next race. Around mile 9 I felt really good and thought to myself, “hey, I can do this! This is fun!” It was nice to feel that my training up to this point was paying off and that after a few hours of running, my body still felt strong, albeit a bit tired.

Warm up a bit better — the ups and downs started almost immediately and I definitely noticed that they got easier after a few miles when my legs were warmer.

It’s pretty straightforward, I’m not sure I have any inside knowledge after doing the race.

While the race starts at the water, most of the course is back on trails in the woods. But, at about mile 11ish, it pops back out on a beautiful bluff looking over the water. The shining sun and great view definitely gave an extra boost of energy to finish off!

I’ve run half marathons before, but this was my first race on a trail. I found the course challenging, with about 2,700 feet of elevation gain. But, the gain was never more than a few hundred feet at a time, so there was always ample time to recover after the climbs.

The race was very well run. The shuttles to and from the park from a nearby parking lot ran consistently, the aid stations were stocked, check in was easy, and the start and finish were smooth. The organizers sent out a very comprehensive email a few days before the race with everything we needed to know. I was impressed.

As a newby, I’m not sure I’m the best judge of this. The top woman for the half marathon finished in 1:50, with many women close behind. From my point of view, there was plenty of competition!

Sign-up was easy, just make sure you do it in advance because the price does go up about 1.5 months before the race. Getting there was also easy. Because the race didn’t start until 9:40, we just left Seattle early and caught the 7am ferry from Kingston. I expected longer ferry lines, but we got on no problem. The race isn’t huge, and there are probably quite a few people that drove onto Whidbey from the other side. We parked at a school a few miles from the start because there is limited parking at the park, and there were organized shuttles and buses to take people to and from the park. We immediately got on a bus after parking, and there was a bus ready to leave when we wanted to go back after the race. Easy peasy!

There were two aid stations, the first at about mile 4 and the other at about mile 9. They had bananas, pb&j sandwiches, m&ms, and probably some other treats I didn’t pay attention do. And of course, water and gatorade (or something similar). The aid stations were nicely spaced, but I also was wearing my vest with water, tailwind, and huma gels, so I was never in great need of the aid station. There was a very handsome golden retriever that managed to be at both aid stations and at the finish line as well — I was a fan.

We lucked out with amazing weather. The morning was cloudy, but by the time the race started at 9:40, the sun was starting to peak out. There were only one or two muddy parts of the trail, I don’t think it had rained for a few days. Later in the race, the sun came out. I couldn’t have asked for better weather for a February race.

I wore my vest, but because of the two aid stations during the half marathon, you could probably just carry water.

I saw a few people that were at both aid stations and the finish, but my sense is that most spectators just hung out at the start/finish.

The race organizers did a raffle after a good amount of the runners had finished, while everyone hung out in the park and enjoyed the sun and after race snacks. They gave away t-shirts, chocolate, wine, etc. There were mugs and tumblers for the top three finishers of each race. It seems that many of the top finishers didn’t know about the award mugs, because the majority of the prize mugs were leftover as the organizers cleaned up.

I may be biased because this is my first longer trail race, but I give it 5 out of 5 stars. Beautiful location, challenging course, good food, easy transportation, not too far away from home, and friendly funny organizers.