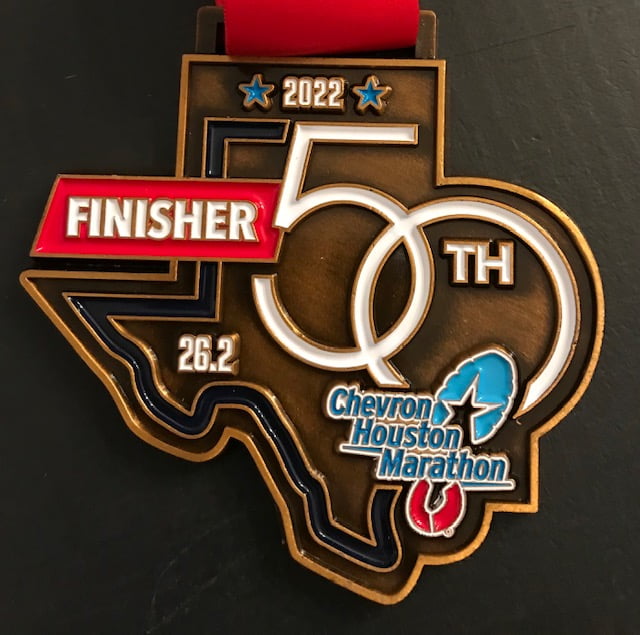 It’s been a ten year journey working towards a Boston Marathon qualifying time. My November Tulsa Half Marathon time of 1:52:08 and my December Dallas Half Marathon time of 1:49:08 indicated I was ready to qualify at January’s Houston Marathon. I was now in a position to run sub 3:55 and easily qualify for Boston. However, the Dallas Half resulted in a couple of injuries that needed to be addressed in the five weeks leading up to Houston. I had to cut way back on my training, reducing my 40-50 weekly mileage to 20-30 miles/week. My last challenging workout was nine days prior to Houston. I ran a 16 miler that consisted of a 5 mile warmup, 10 miles at 8:30 pace and a one mile cool down. I ran a total of 3 miles the week leading up to the marathon, a 2 miler three days out and a 1 miler the day prior. The goal was to get to the starting line as healthy as possible while maintaining my fitness.

Due to the injuries, my goal for Houston was to get a solid Boston Qualifying time without going too hard, too soon, risking blowing up. My race strategy was to run a very relaxed and comfortable 4 hour pace (9:09) until mile 16 or 17. Then slowly pick up the pace, chipping away at a sub 4 hour marathon. The Official Race Pacers were awesome! Since we were about 50 seconds ahead of a 4 hour pace at the 16 mile mark, I made a calculated decision to stay with the pacers until mile 18. The course makes a 90 degree turn at mile 18 and the 12 mph NW wind would become a quartering tailwind. I then transitioned from a 9:05 pace to a 8:50 pace and sustained that to mile 24. At that point, it became very difficult to sustain the 8:50 pace. Any marathon that you race is going to become very challenging at some point. If you train properly and don’t go out too fast, you can push that challenging portion of the race out towards the finish line. In my case, the very challenging portion of the race occurred with 5K to go. Many marathoners, beginners through pros and everyone in between, make the mistake of going out too fast. If you want to know how to run the perfect marathon, read Deena Kastor’s account of her Bronze medal performance at the 2004 Athens Olympic Games in her book “Let Your Mind Run”.

This was a huge confidence builder: If you’re dealing with an injury several weeks prior to a big race, you can reduce your mileage and maintain your fitness. The week prior to a race, there is almost nothing you can do to improve your fitness. There’s many things you can do to wreck yourself. Years ago, an elite marathoner flew to Puerto Rico a week before a marathon to acclimate to the humidity. Upon arriving, the runner became very ill with the flu. He literally laid in bed the entire week and did no training. The day before the race, he felt a little better and went for a short run. On race day he performed at a high level achieving his goal. This story gave me confidence that I could do the same. I ran a total of 3 miles the week leading up to the marathon. I ran 2 miles three days out and 1 mile the day before. The goal was to get to the starting line as healthy as possible while maintaining my fitness. Mission accomplished!

Running with a pacer is an awesome experience. I had never run with a pacer. The pacing leadership and skill demonstrated by the four hour pacers led to my Boston Qualifying time. I could not have done it without these to fearless and cheerful leaders. In addition to setting the perfect pace, they shared stories, told jokes, kept the race lite and fun along with pointing out upcoming aid stations, bathrooms, and upcoming turns. I also got to experience the “Group Effect”. Our 4 hour pace group consisted of about 15-20 people. During the race, especially in the early stages there was the opportunity to have brief conversations, getting to know each other. As the race progressed, we were all pulling for each other. I didn’t really want to leave the group at mile 18 as there was a really good running vibe. After I crossed the finish line, I hung around to see my group cross the finish line a couple of minutes later. This was very special.

The course is awesome. You start and finish in downtown Houston. You run through some beautiful neighborhoods, Rice University and Memorial Park. There are thousands of spectators throughout the race cheering you on. 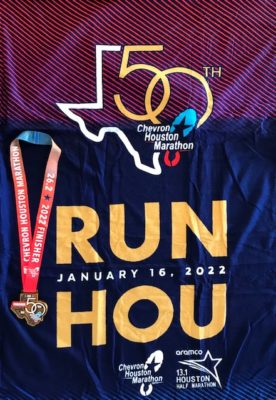 This was the 50th Anniversary of the Houston Marathon. It is a well oiled machine!

This race sells out almost every year. You must sign up early. Registration for the January 2023 opened immediately after Sunday’s race.

The aid stations are frequent and have gatorade endurance followed by water at every stations.

I have raced the Houston Marathon twice. I’ve been fortunate both times with regards to weather. It’s Texas, so it could be hot or very cold. Two days before the race the high was 75 degrees. The morning of the race the temperature was 31 degrees with 10-15 mph winds. However, the sun came out, it warmed up into the low 40s and the wind calmed down a bit, 5-10 mph. It turned out to be almost ideal conditions.

Scott Sayler is a coach with Team RunRun. To learn more about him or work with him, check out his coaching bio. 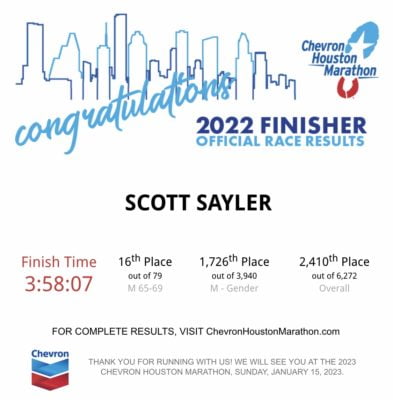