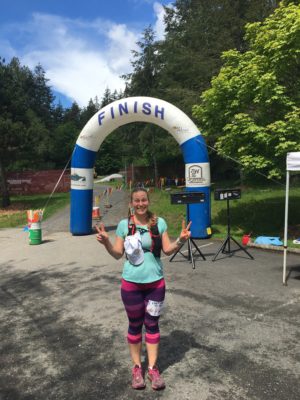 Nothing I can think of.

It was WEIRD that I didn’t bring Iggy (my dog) even though the organizers told us that dogs were allowed on the trail. But in terms of the race, nothing weird.

I’m happy with how I managed my effort. I hiked the big climbs, but really pushed it on the flats and downs. (This is relative because I’m not the speediest runner). I stuck with another runner and his dog for a few miles, and pushed myself to keep up with him. I was a bit worried that I had gone out too hard early in the race because the last climb was a struggle. I got excited about catching people on the downs, and was just having fun hopping down switchbacks. But once I got to the top of the last climb and knew there were only a few miles downhill left, I was able to let loose and go relatively “fast” for the last few miles. I was pleased that I finished at a faster pace than the rest of the race, but also left it all out there and almost threw up during the last 400 meters. I also stayed on top of fueling, and never got noticeably hungry or thirsty. While my legs were tired during the last few miles, my energy didn’t dip. 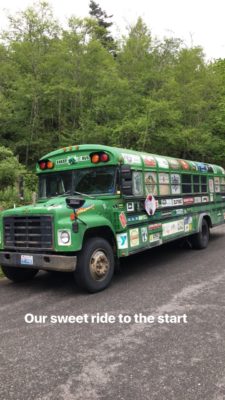 I’m still working on my fueling, on both what I eat and drink and making sure I’m eating frequently. I think I had too many shot bloks, which might have caused my queasiness during the last climb. I like them, but I think I also need something starchier in my stomach. This was a great race to work on managing my effort. My next race is a 50k with about twice the elevation gain, and I learned that I need to go a bit slower if I’m going to finish that race!

None. Everything was straightforward.

The course is gorgeous. After a few miles you find Fragrance Lake, small and hidden in the woods. At a few points there were views of Puget Sound. We had the trails to ourselves and only crossed trails with mountain bikers a few times.

It was a challenge for me! The 25k was somewhere around 3500 feet of elevation gain. The race starts right off with a 1400 foot gain over about two miles. I would definitely recommend getting a good warm up in before the start. Then there is a 500 foot climb and a 750 foot climb, along with some shorter rollers along the way. My legs were hurting by the last big climb! This race is a great training race for longer distances with even more gain.

Very well run race. The party bus was there on time to take us to the start, we started on time, and there were burgers at the finish line! 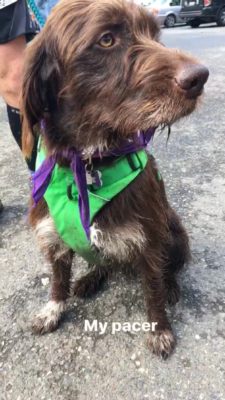 There were some pretty fast local runners. The results aren’t up yet, but I got the sense that I finished somewhere in the middle of the pack for women. The 50k winner finished in about 5 hours and 10 minutes.

No special handshake needed. You could sign up until the week before the race, and spots were still available. It was easy to get up to Bellingham the morning of the race. It didn’t start until 10am and I left Seattle around 7:15. The parking lot was full, but there was plenty of parking along the road. No bib pick up until that morning. Everything was quick and easy!

The 25k passed the same aid station twice, at about 7 miles and at 12.5 miles. They had water, electrolyte drink, potato chips, bananas, trail mix, gummy bears, and some cliff bar apple saucy packets. Well stocked with enthusiastic volunteers. They were missing my personal favorites (potatoes and peanut butter and jelly sandwiches), but I survived.

It was a little rainy at the start, but dried up and was fairly warm. I ran in a t-shirt and capris. The finish line was sunny and beautiful. A typical NW spring day. There must have been a fair amount of rain during the days leading up to the race because there were some fairly big mud puddles.

Shoes with good traction. It was muddy and very slippery on some (but not all) of the downs. I wore my Soloman vest and carried water and snacks. There were only two aid stations for the 25k, so it’s necessary to carry some of your own goodies.

Not very, unless they know the trails. There were a few points where we passed roads where a mountain biker’s car was parked, so there is access to a few points along the trail. I didn’t see folks cheering along the course, but it might be easier to do so during the 50k.

All participants received a nice little engraved medal. I’m not sure about awards for the top finishers.