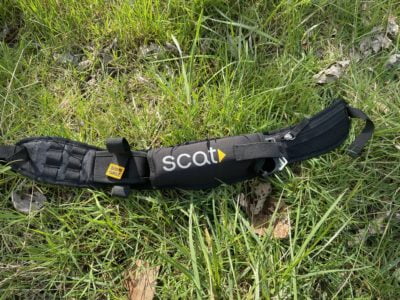 As a former Yellowstone Park Ranger I am extremely bear aware. The Scat Belt GRIZ is the perfect solution for runners traveling through areas inhabited by bears (especially grizzlies) who need a way to both comfortably carry and easily deploy bear spray. With a cell phone holder and zipper compartment that can fit a key and a gel or two, it can easily function as a carry all option while on a short run with a handheld. It can also be worn comfortably in conjunction with a running vest during longer training days or races.

Comparison to Other Brands

I have also tried the Counter Assault Trailrunner Neoprene Bear Spray Holster. This item allows the runner to carry and deploy bear spray easily from a waist belt much like the Scat Belt. However, I found that even the smallest size of the Counter Assault Holster was too big for me. This resulted in the belt and spray bouncing as I ran which is rather annoying.

The Scat Belt GRIZ in size SM/MD fits snugly and securely around my waist with no bounce.

Additionally, the Counter Assault Holster has rougher fabric which, when combined with the bounce, caused chaffing. The Scat Belt does not have super plush fabric. However, it is still comfortable and does not cause chaffing even when I’m running in a sports bra or crop top.

Finally, the Counter Assault Holster does not include any additional features for carrying essentials. It only holds bear spray.

The Scat Belt GRIZ is a fairly new item product and upgrade from the original “CUB” version which I never owned. So far it has held up well! The product appears to be durable and I suspect it will last years. It also carries a lifetime warranty.

Changes for the next model

The phone holster is a bit tight for my phone and I have to wrestle it out. It would be great if I could deploy my phone as quickly as I could deploy my bear spray from this belt! However, I should also note that I have a larger phone with a substantial case. I think a second model of the Scat Belt that includes a bottle holder along with a larger zipper compartment for carrying extra nutrition might be a wonderful addition to the Scat Belt lineup. Having a minimalist and more substantial bear spray belt carry option would be great!

I have and will continue to recommend this product to to friends and family who travel though areas populated by bears!

I paid full price for this gear and have no affiliate links at this time.

Dandelion Dilluvio-Scott is a running coach with Team RunRun. To learn more about her or to work with her, check out her coaching page.