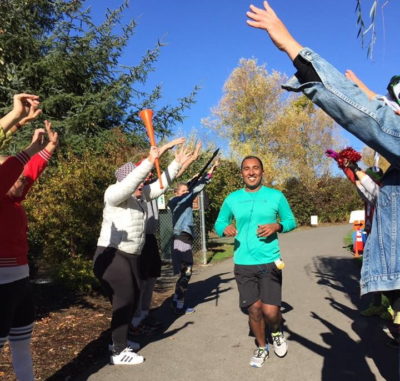 These are nitpicks, but:

The 15 mile timing belt didn’t work properly, so my spectator didn’t get an update from that milestone.

I was happy that I ran at a pretty consistent pace through about 23 miles, and then slowed down only slightly. I didn’t hit much of a wall, and managed to pick off a number of people who significantly slowed down in the last 10 miles or so.

Can’t really think of any “gotchas”. It was a great race and went smoothly. There’s no solid food at the aid stations (eg: bagels or Clif bars), so you should carry those with you if you need them.

The course is two outs and backs; from the start-finish area, you do about 4.75 to the NNE and back, and then 8.5 to the NW and back. For much of both of these sections, it’s pretty difficult for a spectator or support person to access the trail or road, either due to lack of roads close-by, or due to roads that are closed.

It was well run. The surplus of aid stations, sufficient portable toilets, small number of runners, easy parking all made the race a pleasant experience.

Can’t think of anything.

Given that this is mid-October in Seattle, I’d say it’s about 50-50 between a cool and dry race like it was this time around (perfect, in other words), and rain. So check the weather a few times before the race.

Spectators – is this a friendly course for your friends and family?

So-so. There were relatively few points on the surrounding roads that had easy access to the course. But where there was access; it was easy to find parking and make the short walks to the course.

Very large, heavy medal. I appreciate that they gave people virtual swag; because the race bag is usually rubbish that sits around on the counter for a few weeks until I throw it out. I’d prefer a tech t-shirt to the cotton ones; so that was slightly disappointing.