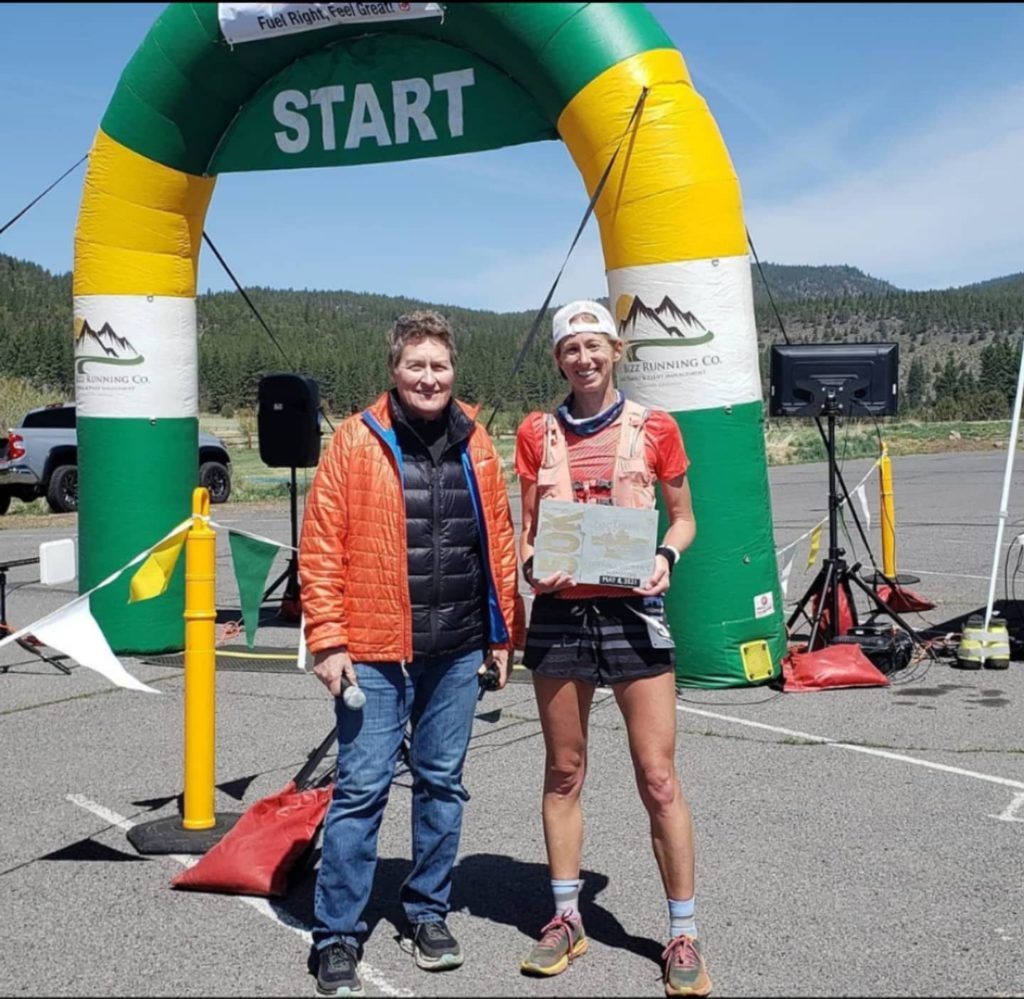 Coach Ashley Nordell shares her insights from her recent race at the Paiute Meadow 50k in Susanville, CA

Two weeks ago I listened to a podcast my friend Jaime Maher did with the amazing RunHard MomHard ladies. She spoke about “reframing” as a way to mentally change the negatives in your head to positives. This resonated with me, because, if I am being honest, lately my mental game has been a grade D, if the grader was being generous.

I signed up for the Paiute Meadow 50k in true me fashion- about a week before the event. Fear of commitment? Lately, it is fear of the Ultrasignup button. Feeling extremely gun shy on the racing front after my last race (15 months ago), had me puking after the second day (it was a three day stage race), and all long efforts and adventures of last year ended with the same result. Ultrarunning is hard. Ultrarunning and puking is both hard and not fun. I had about zero confidence in my body after last year, and despite having been in this sport for 18 years, I felt like I was back to square one with my run nutrition.

Leading up to this race was a mental battlefront on many levels. The parenting stress levels these past two weeks have been in the red zone. Fellow moms and dads of kids who struggle with emotional regulation, I see you. Hard does not begin to describe how parenting has felt lately, and as a result, running feels hard too. Because our bodies do not know how to differentiate stress.

I traveled down to the race alone. Another story, and another reason I almost did not go to the start line. Super grateful for a husband who pushes me to take the time I know I need but will quickly give up because Mom guilt is a real thing too. 6 hours of driving with nothing but my crime podcasts for company. It’s a good distraction.

First example of following Jaime’s reframing technique: “It is a bummer your period came a week early just in time for this race, because if you don’t have stomach problems enough as it is… “ became “Well at least you knew in time to change the shorts color you planned to race in.”
I talked to myself like this the entire race. I forced myself to think I was feeling good until it was true. As I messaged one of my athletes on race morning who was also doing a race that day, “Fake it until you make it, smile until you mean it.” If my legs feel wobbly early on, I reminded myself I had spent the day before in the car, and this just meant my body would not let me go out too fast. If I felt like a climb was going on forever, I reframed the mindset to whatever climbing I was doing was going to result in a downhill for recovery. Rocky creek bed for a trail? No problem, I love Arkansas, and this was just like running my favorite trails. And so on.
I ran pretty much alone the whole day, and often that is the best for me so I run my own pace. It gave me 4.5 hours of mental reframing, and in the end, this race was exactly what I needed.
The results gave me confidence in my body again, confirming that although there have been many rough runs lately, there is still something left to give. But it also gave me confidence in my mind again, that I could find positives even when lately that has been a struggle. I have always been a big promoter of smiling at races- no one forces us to do them, and the energy we give off is important. But I felt like I was able to smile both outside AND inside at this race, and that is why I feel it was a success.

Finally, I need to give a shout out to the amazing Paiute Meadows 50k in Susanville, CA. It is beautiful, super well marked (which is important, because if you see a map of the course, you will understand why), technical, full of great energy and people. I love getting to see new trails during a race because there are no sections to dread if you do not know what is coming up. Now I know.

Coach Ashley is a coach with Team RunRun. To learn more about her or to work with Coach Ashley, check out her coaching page.